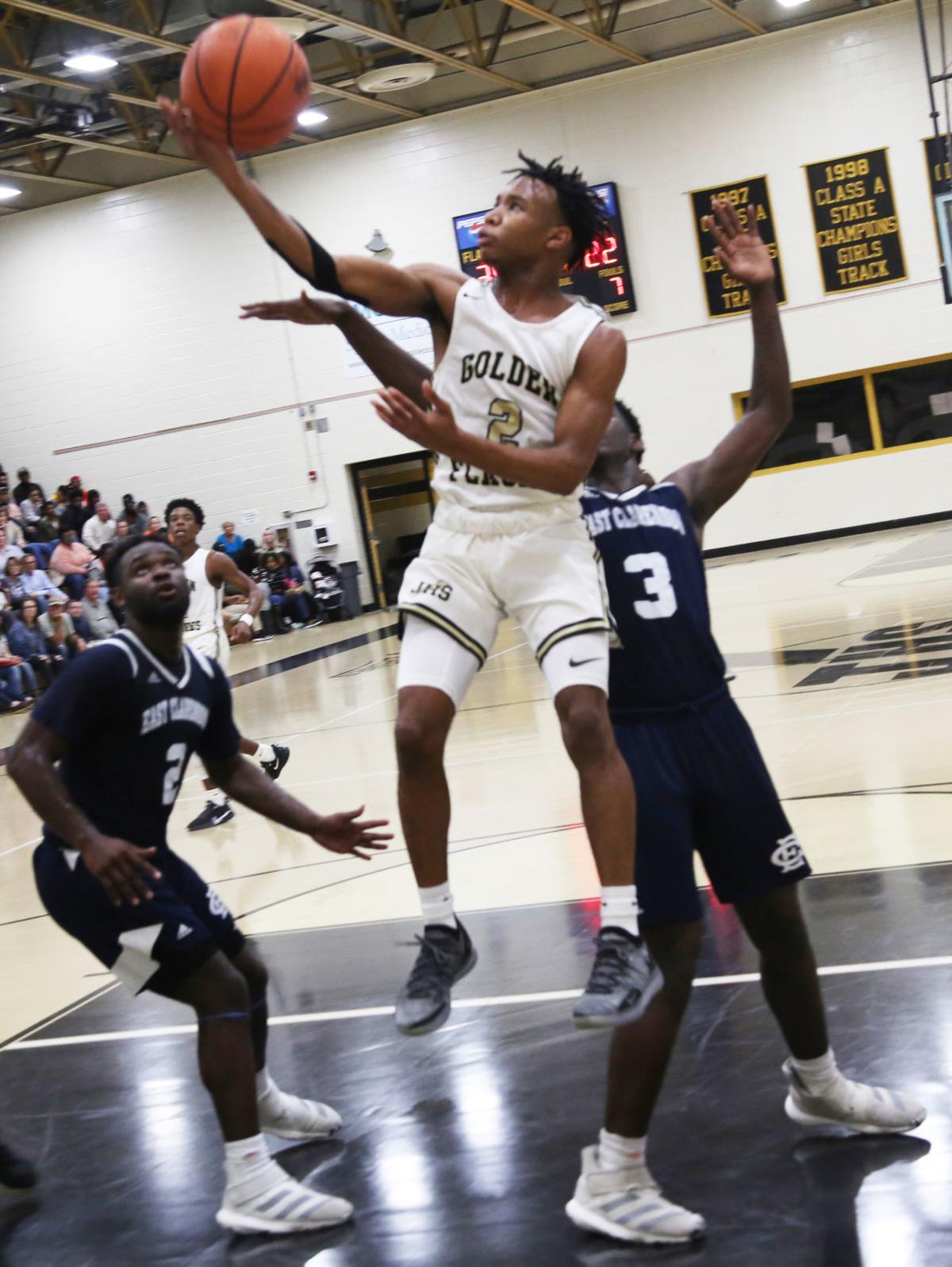 Johnsonville's Quez Lewis (2) elevates for a shot during Monday's game against East Clarendon in Johnsonville. 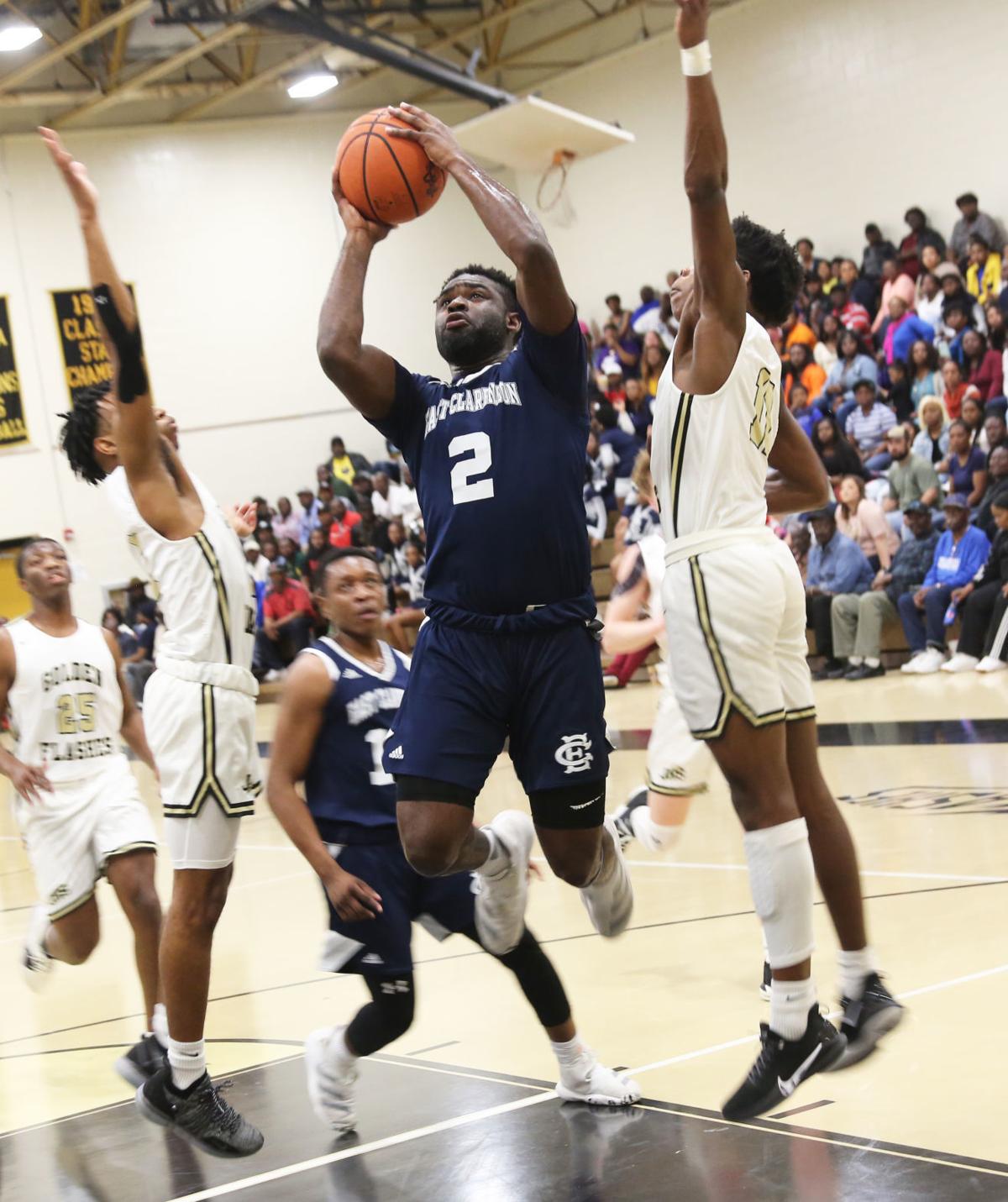 East Clarendon's Tyjhai Calvin (2) splits the Johnsonville defense for a shot during Monday's game in Johnsonville.

Johnsonville's Quez Lewis (2) elevates for a shot during Monday's game against East Clarendon in Johnsonville.

East Clarendon's Tyjhai Calvin (2) splits the Johnsonville defense for a shot during Monday's game in Johnsonville.

JOHNSONVILLE, S.C. — “Who would’ve thought that this is where we would have ended up,” Johnsonville High boys’ basketball coach Harris Avant said Monday night.

Where the Flashes ended up, it turns out, is on top of Region 7-2A.

In a tense matchup until the end, it was Johnsonville’s hot start and strong third quarter that lifted the Flashes past East Clarendon 67-56 and into a top playoff spot.

The victory also avenged an earlier loss to the Wolverines in Turbeville.

“We’ve been at the bottom of the barrel for the last couple of years, and that’s probably where everyone thought we’d be this year,” Avant said. “Except for us. We knew what we had. We’ve been approaching this past month like it’s playoff basketball.

“I want to praise these guys for their mental preparation. We came in and got mentally prepared and executed a game plan as best we could.”

That included a number of long-range shots. The Flashes connected on seven 3-pointers in the game, including five in the first half.

Jace Avant led the way with two and also went 11 for 13 from the free-throw line. He finished with a game-high 17 points, including 11 in the first quarter.

Quez Lewis and Kody Hanna each added 11 for Johnsonville, and four other players finished with seven points each.

The Wolverines didn’t roll over, however. Down 35-21 in the second quarter, East Clarendon scored eight of the last 11 points to pull within 38-29 at halftime.

But the Wolverine offense was stymied in the third quarter as Johnsonville outscored them 17-7.

“A lot of it is communicating on court and being aware of what’s around you and just doing your job,” Avant said.

East Clarendon was also hampered by a poor shooting night from 3-pointer range and at the free-throw line. The Wolverines were just 4 of 16 from beyond the arc and 12 for 21 at the line.

“They outhustled us and flat out beat us on the court,” East Clarendon coach Seneca Barron said. “Hats off to them. They’re the region champs, and they deserve to be.

“We’ve just got to learn from our mistakes moving forward in the playoffs.”

Tyjhai Calvin led the Wolverines with 16 points followed by JaQuail Wilson with 11 and both Keyon Wilson and Marquis Pearson with 10 each.

The intensity cranked up in the third period when Barron and an East Clarendon player were each assessed technical fouls.

It became white-hot in the fourth when Barron was given his second technical foul and ejected from the game. He argued his case but eventually was escorted off the court.

“The first tech, I get it,” Barron said. “The second tech, I didn’t say anything. … Again, it happens. I’ll just live with it.”

Moments later, two fans were also ejected for throwing objects onto the court.

The high emotions carried over to the final whistle, when a few players (and fans) were separated following the end of the game.

It also spilled over after the game as well as a fight in the parking lot had to be broken up.

JOHNSONVILLE, S.C. -- The East Clarendon and Johnsonville basketball teams met Monday in Johnsonville. The Wolverine girls picked up their 20t…