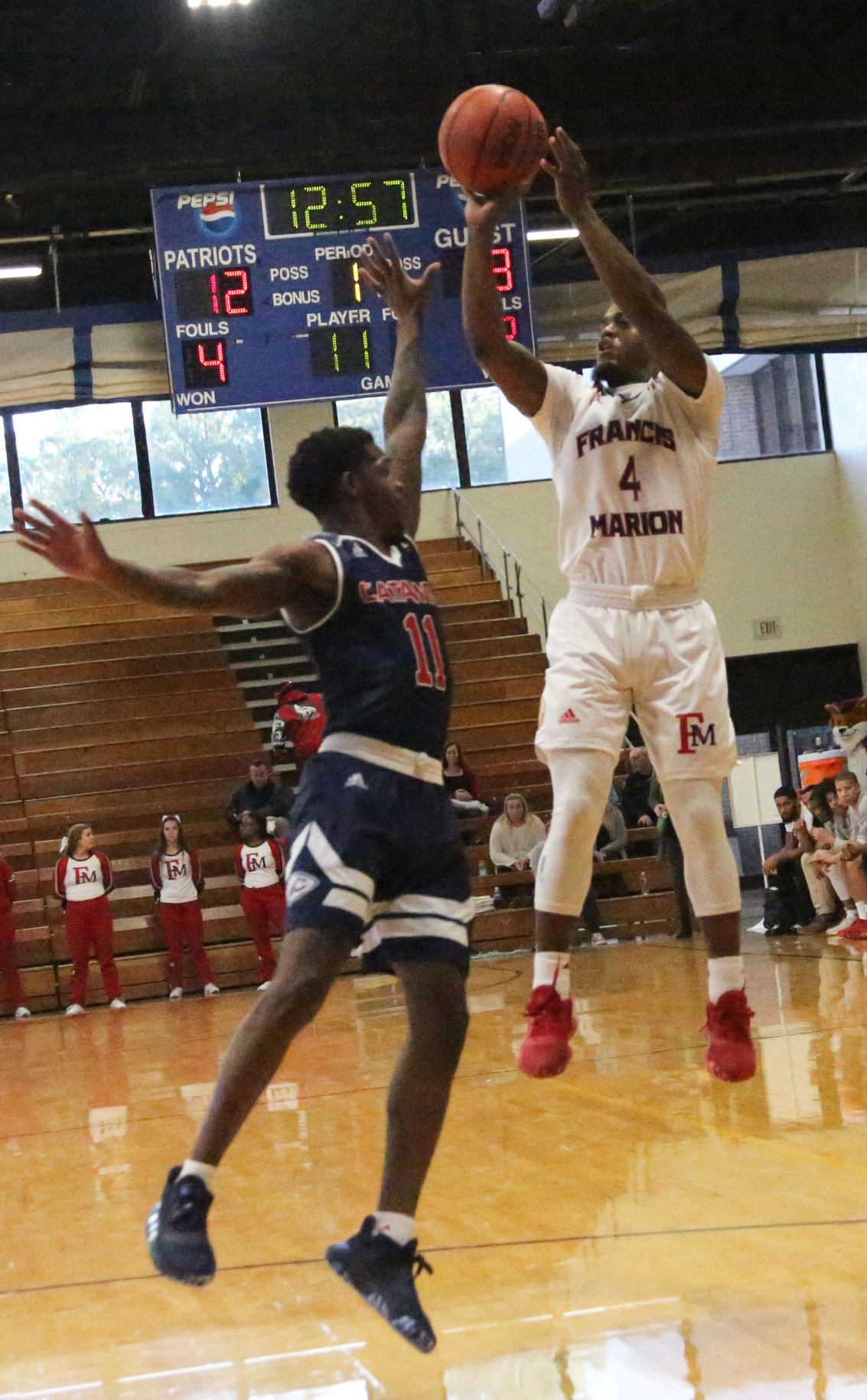 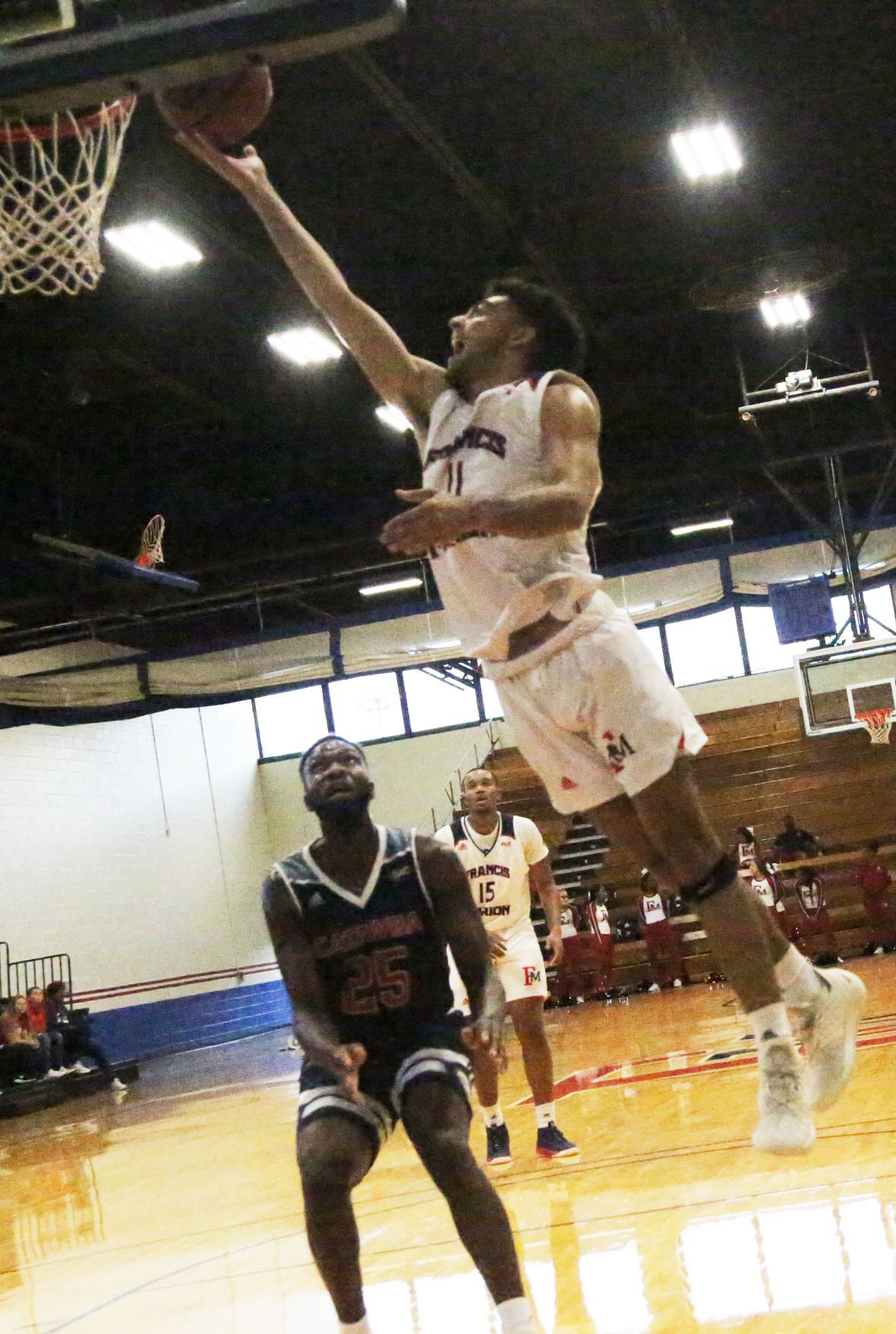 FLORENCE, S.C. – It was the same result and the same margin of defeat for the Francis Marion University men’s basketball team Saturday in its second game of the Peach Belt/South Atlantic Conference Challenge.

But the major difference was coach Gary Edwards was far more pleased with his squad’s 86-72 loss to Catawba than he was the previous day's against Newberry.

“I am much happier than I was last night,” Edwards said. “Even though it’s the same margin, 14 points that we lost by I believe, but I think we played a lot better tonight against a very good team. Catawba is very good; they will be as good as anybody that we play this year in the Peach Belt.

“What gives me hope is that we saw a lot of positive things tonight.”

FMU (0-2) will go back to the drawing board for a while as the Patriots don’t return to action until Nov. 23 when they host Johnson & Wales University (N.C.) at the Smith University Center at 3:30 p.m.

In the meantime, Francis Marion will look to build on what was a tight contest for the most of the afternoon – save one deciding stretch in the first half.

A 10-0 run by the Indians toward the end of the first stanza proved to be the difference as FMU was never able to recover from the double-digit deficit. Apart from that, the Patriots were neck-and-neck most of the way. They trailed by just three points prior to the run and were outscored by just three points in the second half (42-39).

“We really couldn’t get it under that margin,” Edwards said of Catawba’s scoring spurt. “But we stood toe-to-toe with them for most of the game. I thought we ran our offense better. I thought we got some good shots, but we still aren't hitting shots the way we need to. I believe we were 5 of 19 from the three. We didn’t shoot great from the two either.

Two big areas of improvement from Friday’s contest came on the boards. FMU had a better rebounding effort against Catawba, trailing the Indians just 42-37. The Patriots also finished with 26 points in the paint compared to the Indians’ 38.

“I thought we defended them pretty well for the most part and I was really happy we were able to stay on the boards with them,” Edwards said. “We had some things we wanted to try to improve on, and rebounding certainly was one.”

Winston Hill led the way on both ends with a game-high 23 points and 13 rebounds. Newcomer Keith Matthews also recorded his first double-double with the Patriots as he finished third in scoring with 15 points and second with 10 rebounds.

“That’s huge for us,” Edwards said. “We need Keith Matthews to hit shots for us, and he did hit a couple. I think what you’re going to see is Jaquez and Winston – people are going to start collapsing on them now, particularly Winston. …Now he’s going to have the mentality to be an assist guy. Same thing with Jaquez.

“That’s the next step in our development offensively.”

The Indians (1-1) held the edge in points off the bench (28-2) and had four players post double figures, led by Devin Cooper with 21. Marcell Haskett added 16 followed by Larry McLeod with 13 and Ben Zemonek with 11.

UNC Pembroke (2-0) finished undefeated in the PBC/SAC Challenge after a 73-69 win over Newberry on Saturday night.