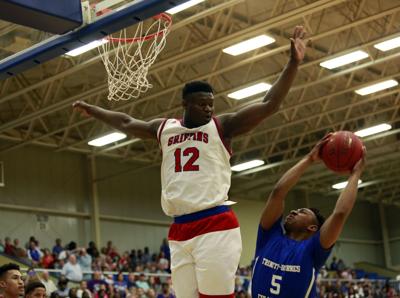 SUMTER, S.C. – 5-star Zion Williamson put on a show in the last game of his high school basketball career in front of a capacity crowd in the Sumter Exhibition Center on Saturday.

Williamson finished with 38 as he led Spartanburg Day to a 74-41 victory over Trinity-Byrnes in the SCISA 2A state championship.

Spartanburg Day coach Lee Sartor said that he believes Williamson may be the best to ever come out of the state of South Carolina.

“I think he’s the best to ever play in South Carolina,” Sartor said. “I’m not taking anything away from any of those other guys, but I think he’s got a chance to be the best player on the planet before it’s all said and done if he continues to work hard and God keeps him healthy.”

Spartanburg Day led just 14-11 at the end of the first and Sartor said his senior leadership was the key in staying poised and withstanding the opening jitters of what would be the Griffin’s third-straight state title.

“You don’t play basketball on paper, you play it on the court,” Sartor said. “I think the kids understand that. We have a lot of seniors and they weren’t going to let us show up and not be ready to play.”

Trinity-Byrnes made a run in the second quarter, got as close as one point and trailed just 30-24 at halftime.

Just when “upset” was on the tip of the tongue of many spectators, Spartanburg Day went on a 21-5 run in the third quarter, led by 12 points from Williamson.

“We set the goal to be in this game at the beginning of the season,” Trinity-Byrnes coach Larry Cullinane said. “These guys reached the goal. This was where we needed to be to have a chance at the trophy. Kids played hard, they shared the ball and left it all out on the court.”

Trinity-Byrnes finished the season 25-6 overall. Cullinane said the Titans will look to bounce back next year and he’s proud of the mentorship that his seniors provided to his younger players.

“Those kids gave us tremendous minutes all year,” Cullinane said. “They know my system and it was really good for them to incorporate the system into the younger guys. It’s sad that they’re leaving, but at the same token, they’re young men. They’ve grown and that’s what this is about.”

Spartanburg Day, led by a 38 point performance from Zion Williamson, defeated Trinity-Byrnes in the SCISA 2A state championship on Saturday at…