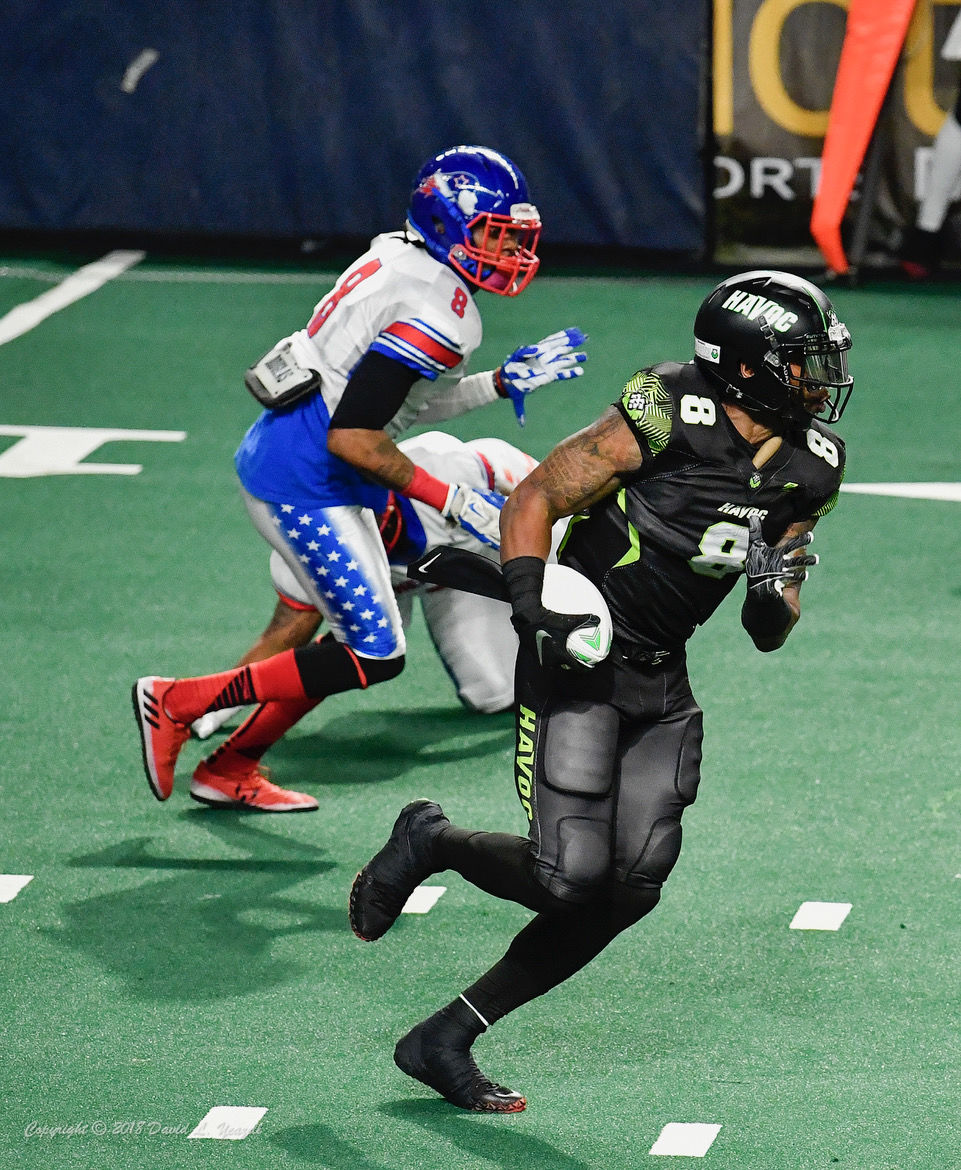 Carolina Havoc quarterback Daryll Clark (8) rushed for four touchdowns and threw for four more - including the game-winner in the final second -- during a 60-59 season-opening victory against Cape Fear on Friday at Florence Center. 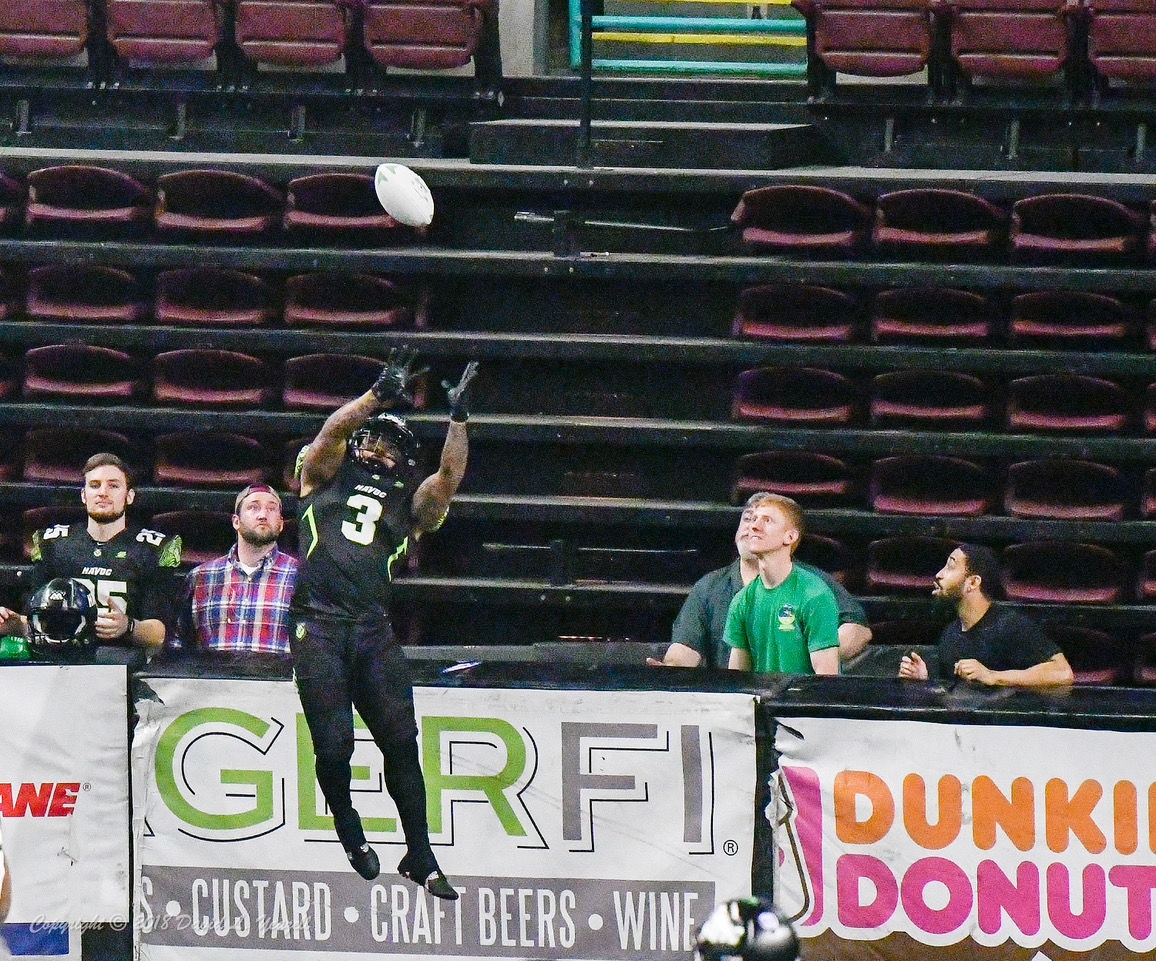 Carolina Havoc wide receiver Alex Coleman (3) leaps up to try to grab a pass during Friday's 60-59 victory over Cape Fear at Florence Center.

Carolina Havoc quarterback Daryll Clark (8) rushed for four touchdowns and threw for four more - including the game-winner in the final second -- during a 60-59 season-opening victory against Cape Fear on Friday at Florence Center.

Carolina Havoc wide receiver Alex Coleman (3) leaps up to try to grab a pass during Friday's 60-59 victory over Cape Fear at Florence Center.

FLORENCE – There were a few false starts and growing pains – both on and off the field – as the Carolina Havoc began their inaugural season Friday at Florence Center.

But in the end, quarterback Daryll Clark gave everyone something to remember.

The former Penn State standout rushed for four touchdowns and threw for four more – including the game-winner with no time left on the clock – to help the defending American Arena League champs eke out a 60-59 victory over Cape Fear.

The Havoc (1-0) return to Florence Center on March 23 to face the Peach State Cats.

“It was very exhilarating – it was exciting,” Havoc coach Anson Yarborough said afterwards. “We had some struggles, but we got through it.”

Those struggles included what looked like a game-changing fumble that almost cost the Havoc a victory near the end.

In the AAL, the team that is leading in the final minute cannot take a knee and must advance the ball at least a year to keep the clock running. On third down inside the Cape Fear 15-yard line, Clark ran the ball and tried to stretch out for a score. The ball came loose and was returned all the way for a touchdown to put the Heroes up 59-54 with less than 30 seconds remaining.

“Me personally, I thought I was down,” Clark said. “But I guess we could say that it’s just one thing that made the final play of the game more interesting.”

That’s putting it mildly. With a couple of penalties in the mix and a couple big pass plays from Clark, Carolina found itself facing a make-or-break final play from inside the Cape Fear 10 with .7 seconds remaining.

As he had all game, the Havoc QB looked for and found Alex Coleman for the duo’s fourth TD connection of the game – this time in the left corner of the end zone to put an exclamation point on a wild comeback.

“You’ve got to have a short memory as a quarterback,” Clark said. “If things go bad one play, you have to pretend it didn’t happen and bounce right back. Coaches did a good job of putting us in the right position to make the plays and the offensive line did a great job the entire night with run and pass blocking. They kept the pocket clean and allowed me time to deliver it to our guys.”

None more so than Coleman. They hooked up for a pair of scores in the first half and two more in the fourth quarter – the first of which came on a 36-yard bomb.

Sportsbooks are dark and odds are long in Las Vegas

It was no secret who Clark was looking to in the final seconds.

“It was a just a matter of getting my proper steps and hoping he would make a clean getaway from the defender,” Clark said. “He did and I just wanted to make sure I put the ball in a good place for him.”

The Havoc QB torched his former team for more than 200 yards combined rushing and passing. Carolina needed every one of them as the high-scoring affair was back-and-forth for most of the evening.

The Heroes drew first blood on a 20-yard TD strike that was quickly answered by Clark’s first rushing TD of the night – this one from 27 yards out as the Havoc went up 7-6 early.

Cape Fear responded in one play – a 30-yard bomb as the wideout got behind the coverage to put the Heroes up 13-7. Momentum swung firmly in the Heroes’ favor when they recovered a Carolina fumble on their own 9-yard line and soon turned it into seven points on a quick 2-yard strike to go up 20-7.

It was all Havoc the rest of the half, however. Clark found Coleman for the first of two TDs on a 5-yard hookup. The duo connected again on a 14-yard pass just before the half as well.

In between, Carolina got two big stops by its defense. The first came on a fourth-down stand inside the 5-yard line and the second came on a big interception by Dominique Bridges that set up the Havoc’s last score as they took a 26-20 advantage into the break.

“Defense struggled a little bit, but that wasn’t because of play-calling or the talent that was out there,” Yarborough said. “We were down three athletes on the back end and that hurt us a little bit.”

It was pretty much score-for-score for the remainder of the game. Clark had another pair of TDs to begin the second half, but Cape Fear got another pair of TD passes and one scoring run from its own quarterback.

Former Lake City High and University of South Carolina standout Shon Carson’s rushing TD and the Havoc’s first Uno of the season (ball through uprights on a kickoff) put them ahead 47-40 midway through the fourth quarter.

Clark returned from a brief injury to find a wide-open Coleman for a 36-yard strike to give Carolina a double-digit lead again. It was short-lived, however, as the Heroes returned the ensuing kickoff 50 yards for a score.

With time winding down, Carolina was forced to try a long field goal that was blocked and returned for a touchdown as Cape Fear pulled to within 54-53 with 58 seconds remaining after a missed PAT to set up the wild finish.

FLORENCE, S.C. -- The Carolina Havoc's inaugural game was a thrilling one as they pulled out a 60-59 victory over Cape Fear in the final secon…