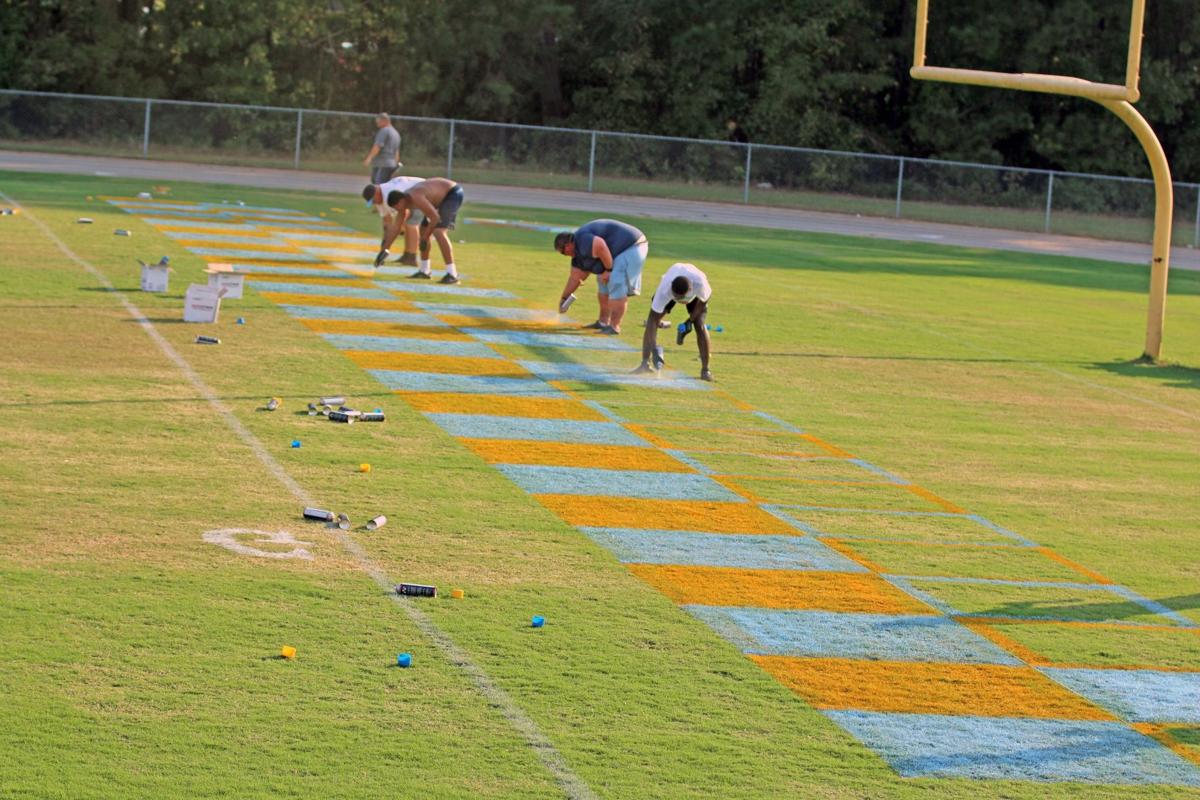 South Florence football coaches and players paint one of the Bruins' on-campus end zones in a checkered pattern of Columbia blue and gold for Friday's game against St. James. 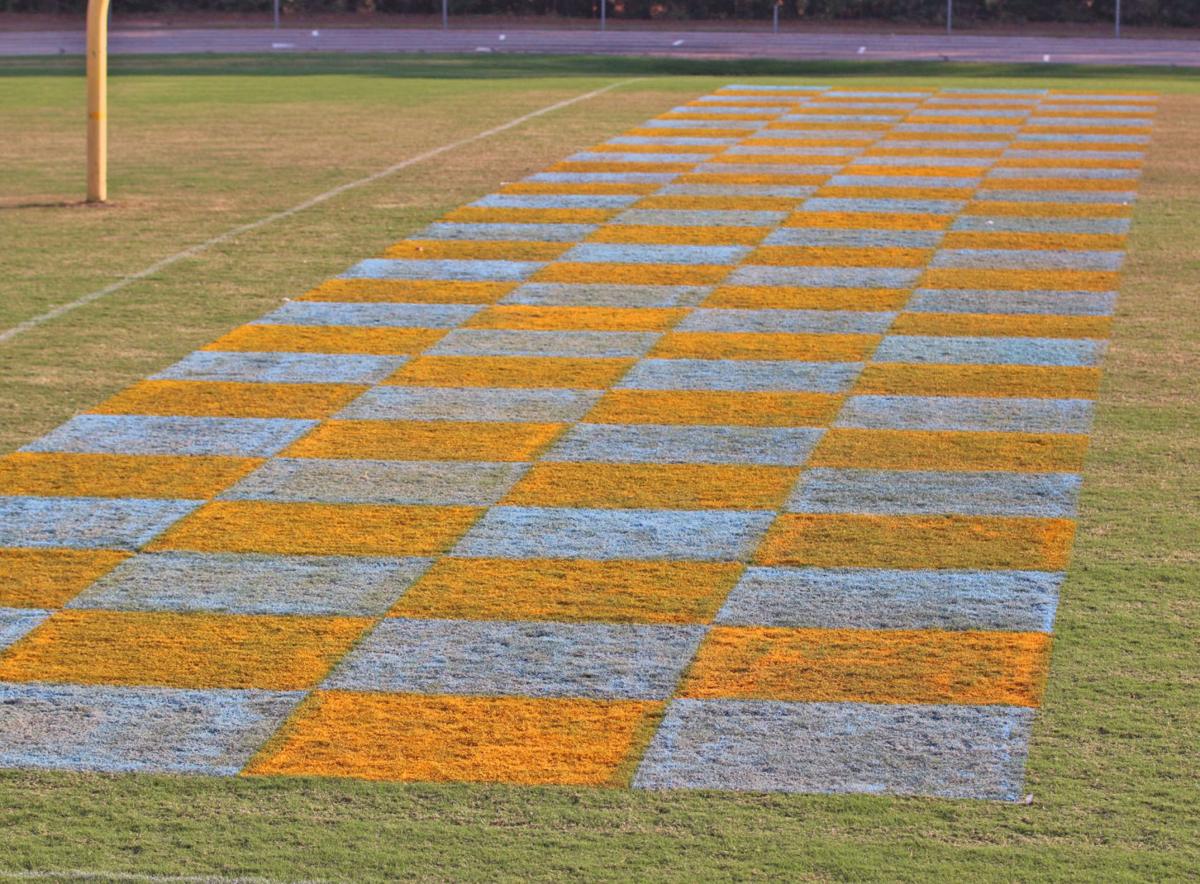 Here is what one end zone at South Florence High School looks like on the Bruins' on-campus football field. It's checkered with the school's colors of Columbia Blue and gold.

South Florence football coaches and players paint one of the Bruins' on-campus end zones in a checkered pattern of Columbia blue and gold for Friday's game against St. James.

Here is what one end zone at South Florence High School looks like on the Bruins' on-campus football field. It's checkered with the school's colors of Columbia Blue and gold.

FLORENCE, S.C. – It’s South Florence’s turn to have a football field of dreams.

No bus rides for the football team, band and cheerleaders from the Bruins’ campus to Memorial Stadium.

For one night this season, at 7:30 p.m. against St. James at the Mike Watts Athletic Complex.

Three weeks after Wilson hosted its on-campus game against Lower Richland, Bruins athletic director Bob Wilson is coordinating as much as he can to make sure that from 7:30 p.m. onward today, it’s all about the game.

“This has been a considerable undertaking,” Wilson said. “It’s been a learning experience. It’s one of those things where it’s new. So I’ve tried to get as much input from as many different sources as I could. I’ve talked to (Wilson A.D.) Derrick McQueen and I asked him what could be done to be improved upon.”

Like it was at Wilson, South Florence does not have a pre-set capacity figure yet for the stadium, which has two large bleachers added from the Bruins’ softball field. But South will have two “standing-room only” areas, as well as an inclined area where people can bring lawn chairs and sit to see the game.

Wilson added there is a seating area for the Bruins’ marching band that is not in the bleachers. Instead, the band’s members will sit in chairs.

“We’re trying to reserve the bleachers for the fans,” Wilson said.

“Each stadium has its own set of challenges, so things that may have worked for Wilson High School would not necessarily work for us,” Wilson said.

Traffic logistics, meanwhile, have been worked out, according to Wilson.

What if there is a line of fans still wanting to get in after capacity is determined full?

“We have the Florence County Sheriff’s Department and city of Florence Police Department there, so we’re in very good hands,” Wilson said.

According to Wilson, five portable restrooms will be added, and there will be two or three mobile concession stands like those at a state fair.

Wilson said three hydraulic scissor lifts will be added: one for a press box and one each for teams’ assistant coaches and film crews.

The South Florence athletic director added that estimated expenses increased for this game by around $1,500.

“It was about $800 together for the three hydraulic lifts, and the portable restrooms cost about $400,” Wilson said. “There are some other things that will go into it. It will maybe be around $1,500 or so of expense that we might not normally incur.

“But we look at it this way, too,” he added. “It’s a different setting, a different situation. It’s not something we would spend all the time. But the money that’s spent can certainly be justified and we’re excited about putting this thing on.”

South Florence, however, will have at least one similar challenge that Wilson High had: This is something that has not been done before.

“It’s just the unknown,” Wilson said. “We have no idea how many people will show up. And we have kids and adults that can walk to the game. That’s certainly something people could not do when we had games at Memorial.”

But on campus, school-themed windscreens are up, and at 5:30 p.m. Thursday, assistant coaches and players were painting in checkerboard end zones of the team’s colors of Columbia blue and gold.

That’s because for one night, this is the Bruins’ home.

“We’re glad to be a part of it,” South football coach David Prince said. “The kids are pretty excited about being the first football team to get to play on campus. Obviously there are a few concerns on whether we’ll have enough seating. But at the end of the night, we just want to win the football game. That’s Goal No. 1.”

<<All pregame entrance lanes the same as normal.

<<Gate by softball field is where F1S students can enter and scan their student cards for free admission.

<<For those who drive after the game to pick up students, take Howe Springs Road entrance.