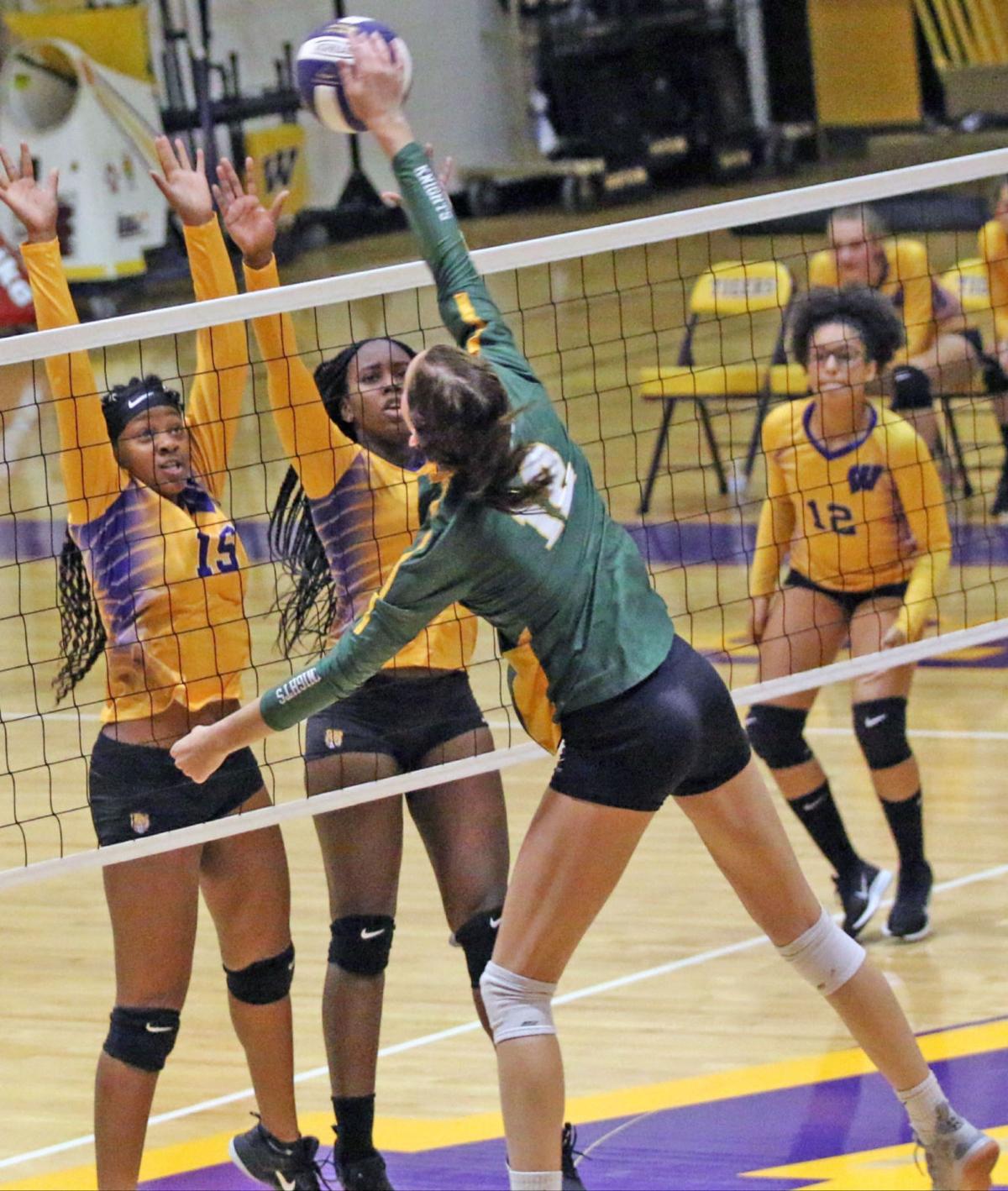 West Florence's Emmy Rollins (12) hits the ball while Wilson's Destany Singletary (15) and Chase Hayes attempt to defend during Monday's match at Wilson High School. Also in the photo is the Tigers' Talia Emmen

West Florence's Emmy Rollins (12) hits the ball while Wilson's Destany Singletary (15) and Chase Hayes attempt to defend during Monday's match at Wilson High School. Also in the photo is the Tigers' Talia Emmen

FLORENCE, S.C. – West Florence volleyball coach Warren Coker not only was proud of his Knights’ five-set win against Wilson on Monday night, he was just as impressed with how far the Tigers’ program has come.

After Wilson lost the first two sets, coach John Davis’ team charged back with two set wins of its own to send the game into a fifth and deciding set.

But West Florence was able to convert when points mattered most and won 15-11 in to seal the match.

“It was a wild one,” Coker said. “We came out looking like we were ready to play and won the first set and in that second set – I dunno. It seemed like the wheels were coming off at the beginning. But they regrouped, and I thought they played better.”

"As good as West Florence is, after being down 2-0, our girls never seemed fazed by it,” said Davis, whose team won a five-set match last week over South Florence. “I preached to them that the only way we could get back in this was to take it one point at a time. So we adopted that one-point-at-a-time theme. And that’s how we chipped away and won a set.

“And then, we won another set.”

The fifth set started just as strong for the Tigers when Chase Hayes converted on a kill for a 1-0 lead.

But after a kill by West Florence’s Lauren Gordon tied the set at 3-3, teammate Emmy Rollins followed with a kill of her own for the lead. Gordon and Rollins then went in for a kill to give the Knights a 5-3 advantage.

The set was tied again at 6-6, but West Florence took command after that. After Ava Flintrop miss-hit on an attempt, a dink by West Forence’s Cami Niles stretched her team’s lead to 8-6.

After that, Niles served back-to-back aces to close Monday’s match out.

“I loved the fight,” Coker said. “They didn’t give up. It was back and forth at the beginning of that fifth set. But thankfully we got some big points.

"But give credit where credit is due. Give Wilson credit. They came back after losing that second game, and they came out and spanked us in that third.”