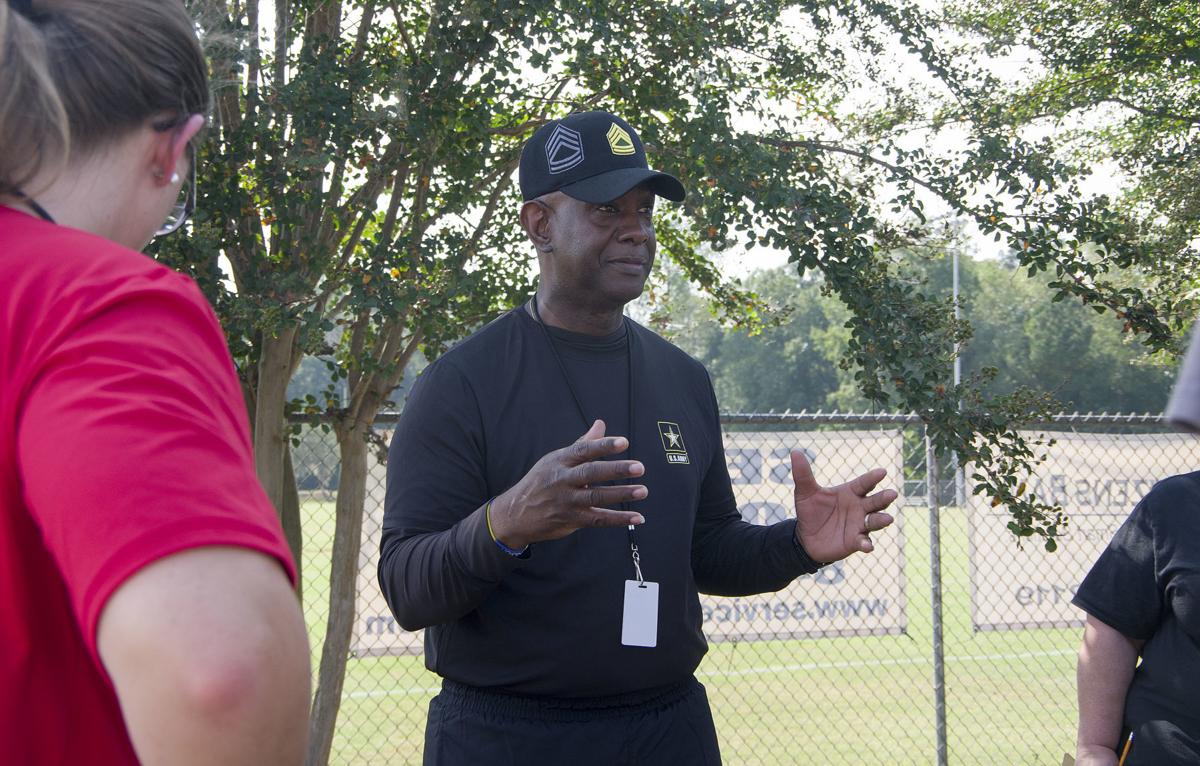 Stormey Gillens, an Army JROTC instructor at Hannah-Pamplico High School, goes over the plans for homecoming with his cadets and the homecoming queen candidates. 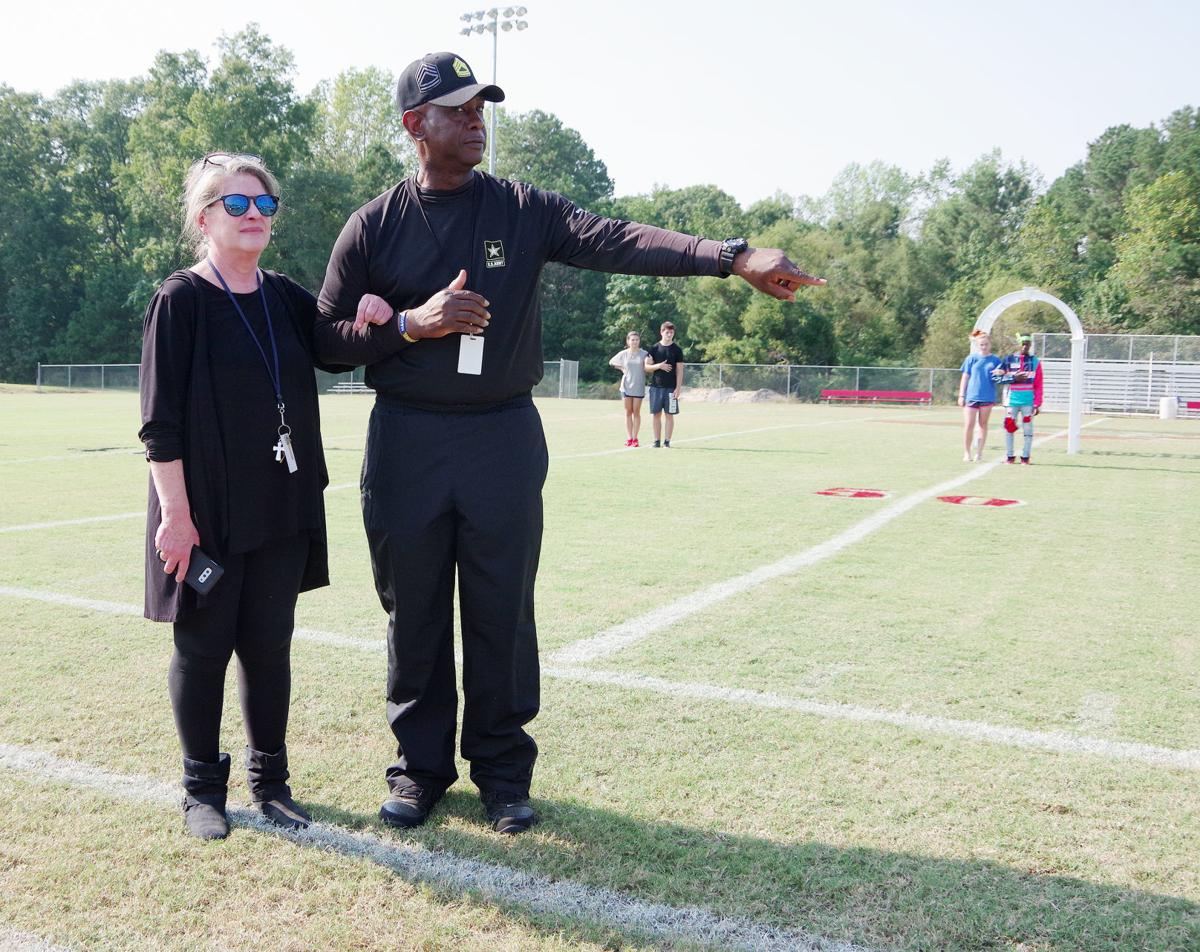 Stormey Gilleys (right), an Army JROTC instructor at Hannah-Pamplico High School, and Dresden Floyd, an English teacher, play the role of homecoming queen and escort during an Oct. 2 run-through of the Oct. 4 actual event. Gillens' cadets escorted the candidates.

Stormey Gillens, an Army JROTC instructor at Hannah-Pamplico High School, goes over the plans for homecoming with his cadets and the homecoming queen candidates.

Stormey Gilleys (right), an Army JROTC instructor at Hannah-Pamplico High School, and Dresden Floyd, an English teacher, play the role of homecoming queen and escort during an Oct. 2 run-through of the Oct. 4 actual event. Gillens' cadets escorted the candidates.

"Don't let that young lady fall, Cully," Gillens directed as the queen candidates, in heels and platforms, navigated the football fields on the arms of his Army JROTC cadets.

Gillens instructed his cadets to pay attention during the run-through, because he wouldn't be on hand giving marching orders at homecoming.

He'd be there, somewhere. Just not front and center giving marching orders.

It was the students’ mission to accomplish homecoming, to smile throughout and to give genuine congratulations happily to the one out of nine of them who would be voted queen.

"This is my 16th year, man," Gillens said as he and his cadets escorted the queen candidates under a plastic trellis arch in the 90-degree afternoon heat.

On the visitor's sidelines, the unit's flag team practiced ahead of presenting the colors at the game.

"I'm the only instructor here this year," Gillens said.

Usually JROTC units have two instructors, one enlisted and one commissioned.

Gillens was the youngest of eight sons born to sharecroppers in Eutawville. The family plan had been for him to go to college and become a minister.

"I actually was forced to go to college after I graduated high school by my parents," he said. "Everybody in my family thought I was going to be a preacher, except me.

"I went to college, tried to be obedient. That was the most unhappiest time of my life," Gillens said. "My mother said do what makes you happy."

"From the mentoring and tutelage and teaching my father and my older brothers gave me, when I got to the military I thought the military didn't have anything to offer me in discipline, because I brought that along with me," Gillens said. "Teamwork? I already had that, because my father taught us to work like a team, coming from a family of sharecroppers.

"The sense of integrity, pride, patriotism, those things I can say I got through serving in the military."

He started in artillery because of the enlistment bonus offered for that specialty, then trained in personnel, transferred back to artillery, then went into chemical, biological and nuclear warfare.

From there, he went back to artillery, became an Army recruiter and spent the last nine years of his enlistment recruiting health care personnel in New England.

"When I transitioned from the Army, I was getting ready to sign a contract with a brokerage firm, Edward Jones, and I'd already gotten my certification to become a JROTC instructor," Gillens said.

One of his brothers, who was a school principal and a judge in Orangeburg County, was at a principal convention in Myrtle Beach.

Gillens said his old football coach, Bernard McDaniel, was now the principal at Hannah-Pamplico High School and was looking for a JROTC instructor.

"I called him," Gillens said. "I was supposed to sign my contract with Edward Jones that Thursday. Wednesday I came here and signed my contract that Wednesday morning. Been here ever since. It was something God ordained.

"Me going with Edward Jones, I could have made a whole lot of money."

Ultimately, though, it wasn't about money.

"I wanted to give back to people and give them the opportunity to get out of life everything they want to get, deserve to get," Gillens said.

Since then, Gillens has been working with the students at Hannah-Pamplico High School to become better people.

"I think people get the whole concept of what we do as JROTC instructors wrong," Gillens said. "Our job is not to teach young people to join the military. Our job is to motivate young people to become better citizens.

"If we have all our youth, not just those in JROTC, to become better citizens, then we can go back to the days where — I grew up in the country — where we slept with our house windows up at night and our car windows down at night.

"Nobody bothered anybody's stuff, because everybody looked after each other. If we can instill that into our youth of today, I think we will have done our job."

Gillens might not have a church and congregation, but he has a calling and a classroom.

"I think the platform that being an educator gives us, I think it is in a sense being a preacher to a certain extent. We have the listening ear of our youth to hear; we can instill so much into them and feed them, it's like the pastor feeding his congregation."

As for homecoming, it went off without a hitch — or at least a hitch that anyone noticed.