This is the proposed entrance to Tiger Stadium on the Wilson High School campus. A donation of more than $500,000 will help fund the project. Construction will start in September. 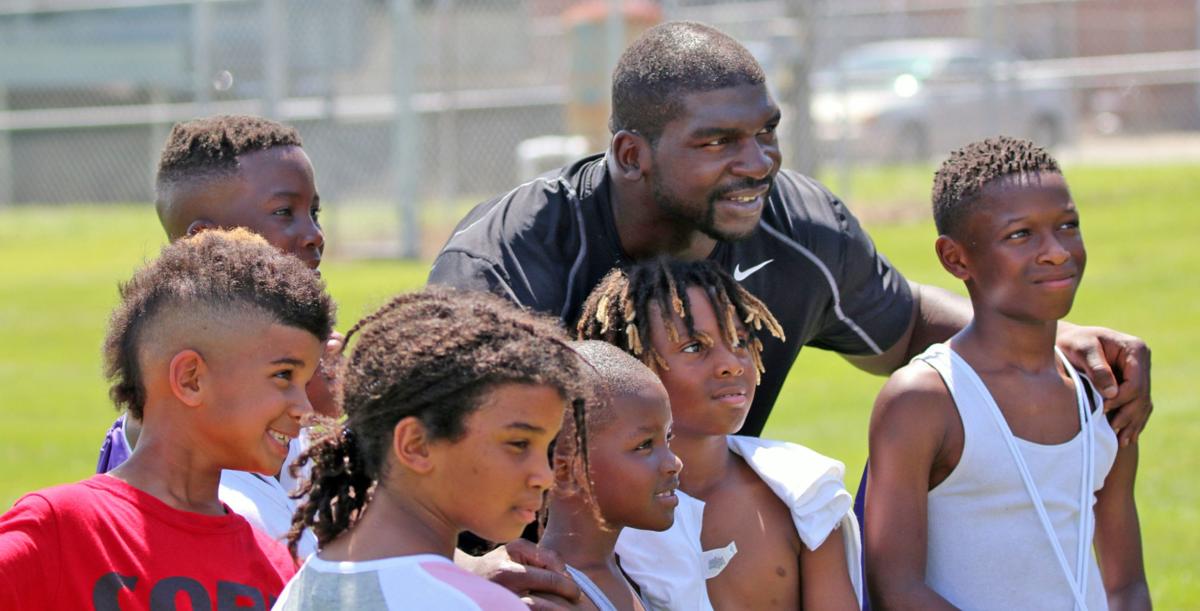 Super Bowl champion Lawrence Timmons poses with some kids at a youth summer camp he hosted in 2018 on the campus of his alma mater, Wilson High School.

This is the proposed entrance to Tiger Stadium on the Wilson High School campus. A donation of more than $500,000 will help fund the project. Construction will start in September.

Super Bowl champion Lawrence Timmons poses with some kids at a youth summer camp he hosted in 2018 on the campus of his alma mater, Wilson High School.

Much of the money will go toward an on-campus football stadium for which construction will start in September.

From the time he graduated from Wilson High School in 2004, Timmons was destined for stardom. He was not only a star linebacker at Florida State University but also a first-round draft pick by the Pittsburgh Steelers, with whom he won a Super Bowl.

But Timmons had long made it known he never forgot his Wilson roots. So much so, he recently made the donation that totals more than a half-million dollars. It will go toward several different areas within the Tiger athletics program, specifically Tiger Stadium’s renovation.

Projects also include resurfacing the current track (and adding a ninth lane) along with additional seats on the home side that will accomodate up to 5,000 fans. Tiger Stadium will also get new signage at its entrance. An artist rendering shows a large brick entrance with a "Tiger Stadium" sign, in Wilson purple with a gold and a tiger paw.

“All of these upgraded facilities, around the school and athletic complex, give students a renewed pride in their school,” Timmons said in a news release. “I’m glad to play a part in that.”

Timmons’ donation comes on the heels of the completion of Wilson’s new weight room, where the equipment features Wilson Purple and Gold.

"A lot of times, it’s bigger than sports," said Derrick McQueen, Wilson's athletic director. "Sometimes when we think about some of the pro athletes, we have a lot of preconceived notions and stuff like that. But to be able to meet (Timmons) and work with him and talk to him about a lot of the things he'd like to do for our community, it's just a testament to everything he's about."

“(Timmons) has been a very important supporter of Wilson since I’ve been here,” Howard said. “He’s paid for hundreds of kids to participate in free camps that we’ve hosted. He’s always checked on the boys to see what their progress has been, and I just think this type of commitment just shows how important Wilson and the Wilson community is to him. Obviously, these are renovations that are warranted and needed. Our kids are blessed, our kids are spoiled. But they deserve to be spoiled. So we’re just really happy about that. I can’t be more excited.

“It shows the success that he’s experienced has obviously come from the rearing he received from Wilson High during his time there. We’re extremely happy and look forward to continuing this relationship that he’s had with Wilson football.”

“I am very appreciative of Mr. Timmons’ contribution,” Robinson said in the news release. “This just goes to show that he remembers where he came from and that he will always be a Tiger. I am excited to see what everything looks like when it is done. Our students and our alumni deserve the best. I think this will motivate them to be even better on the field.”

“Lawrence Timmons is a wonderful example for all of our alumni,” O’Malley said in the news release. “He has moved away and gone on to bigger things, but he remains connected to Wilson H.S. and gives back to that community in many different ways.”