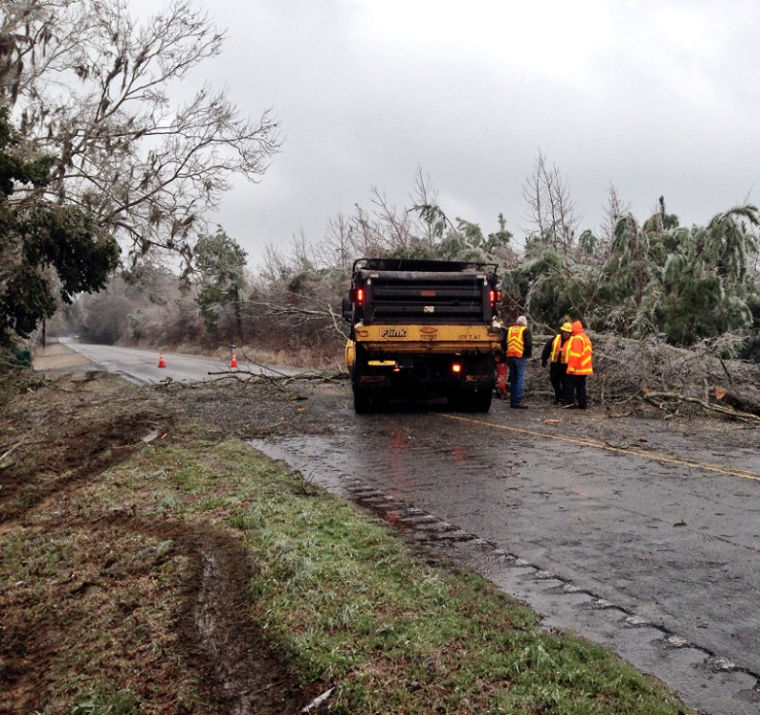 SCDOT crew is clearing a fallen tree on Lake City Highway near Deerfield Road. They say they've been quite busy already this morning. 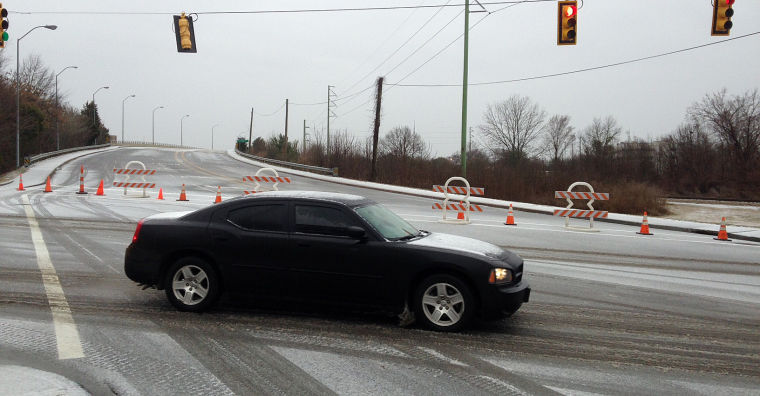 Barricades block the entrance from Lucas Street onto the Martin Luther King bridge over the CSX rail yard and over to Church Street in Florence Wednesday morning. 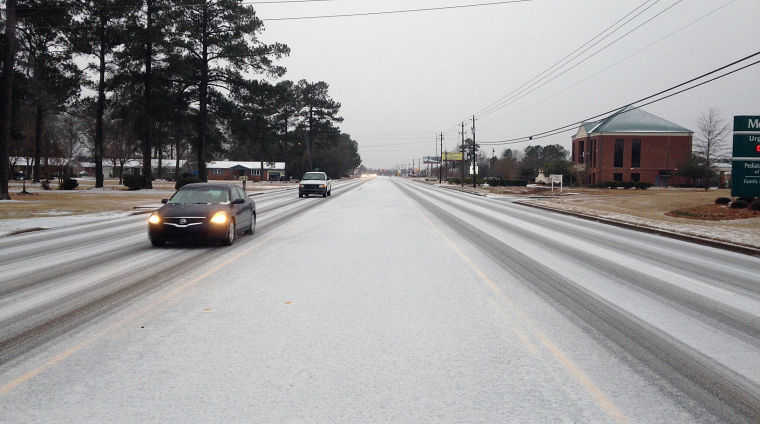 Traffic moves along an ice-covered West Palmetto Street on Wednesday in Florence. 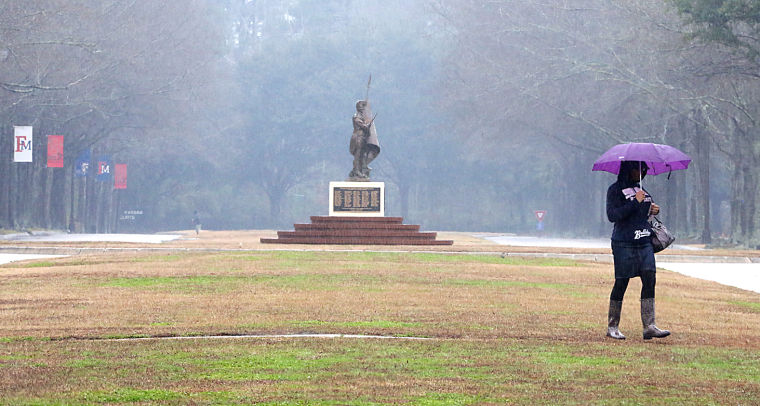 Francis Marion University student Shontae Samuel walks across campus with an umbrella on Tuesday, February 11, 2014. Weather forecasters are predicting ice to accumulate from the impending winter storm on Wednesday.

SCDOT crew is clearing a fallen tree on Lake City Highway near Deerfield Road. They say they've been quite busy already this morning.

Barricades block the entrance from Lucas Street onto the Martin Luther King bridge over the CSX rail yard and over to Church Street in Florence Wednesday morning.

Traffic moves along an ice-covered West Palmetto Street on Wednesday in Florence.

Francis Marion University student Shontae Samuel walks across campus with an umbrella on Tuesday, February 11, 2014. Weather forecasters are predicting ice to accumulate from the impending winter storm on Wednesday.

"Governor Haley has requested a federal declaration of emergency in order to gain access to FEMA assets. This request is a preemptive measure to support state and county operations during the event. If approved, this declaration provides flexibility to the state to request commodities and personnel augmentation, such as generators, bottled water, meals ready to eat, and support teams. If granted the federal government will cover 75% of the cost, with the state responsible for the remaining 25%," Douglass V. Mayer, Haley's communications director, wrote in a release issued Wednesday morning.

Mayer, in his release, indicated the state spent $2 million recovering from the storm at the end of January.

"The state of South Carolina is committed to preparing for and responding to the severe winter weather, however, the state of South Carolina and its local counties and municipalities have exhausted all other resources in the preparation and require the assistance of the federal government to adequately respond to this emergency situation," according to Mayer's release.

A similar declaration was approved earlier in the week for Georgia.

"Major winter storm part two is underway," Pfaff said of a series of two winter storms that pummeled the Pee Dee and Grand Strand Tuesday and Wednesday and were projected to do so through Thursday.

The inland impact from these two storms, he said, could rival the damage left behind by a hurricane.

"Our experience has been with some of these past storms -- like the one in 2004 we've mentioned -- there have been some areas that've had three quarters to an inch of freezing rain and it took a week to two weeks to get back on their feet in some areas. Some of the people we spoke to said the destruction from those past storms was more severe than some of the hurricanes they've had over the years in these inland areas," Pfaff said on Wednesday morning's conference call to update emergency responders and media on the storm.

"The bulk of the amounts will occur across the Pee Dee where we can have upwards of three quarters of an inch of icing, up to one inch in parts of Darlington, Florence and into western parts of Williamsburg County and possibly getting into Marlboro County," Pfaff said of the storm.

In anticipation of such damage, Duke Progress Energy brought in an additional 250 people to stage in Florence ahead of the storm's arrival.

By 10 a.m. Wednesday morning scanner traffic indicated trees and power lines were already down on the ground or seriously sagging throughout the Pee Dee.

“(Tuesday's) flurries appear to be just an ominous appetizer for the main blast of winter weather scheduled to arrive tomorrow and into Thursday,” Jeff Corbett, senior vice president of Duke Energy’s Carolinas Delivery Operations, said. “The severity and impact of the storm depends on several factors, including temperature and wind. But the clouds are gathering and we are prepared for whatever comes our way.”

Crews prioritize work to ensure the largest number of customers is restored as quickly as possible. Essential services such as hospitals and emergency responders have priority.

“Our crews will work as quickly and safely as possible to complete restorations,” Corbett said. “Depending on the number of outages and the amount of damage sustained, we know from past storms some customers may experience multi-day outages.

“I cannot stress enough the importance of being prepared and having a plan in place now in the event your power goes off,” Corbett added. “We appreciate our customers and their advanced preparedness and patience as we brace for this unprecedented event.”

"With the onset of snow and freezing rain this morning, the roads in Darlington County have been covered with ice and snow. Emergency officials are asking everyone to STAY OFF THE ROAD. Calls to 911 should be limited to emergencies only," Darlington County officials blasted out by text and e-mail to county residents.

State officials earlier Wednesday sent out an e-mail asking all state residents to stay off the roads during the storm.

"Florence County Emergency Operations Center (EOC) was elevated to OPCON 2 to facilitate coordination of resources for assistance and assessment in response to the winter storm forecast for the Florence County area today," natural hazards coordinator Kristy Hughes wrote in a release issued shortly after 10 a.m. Wednesday.

SCDOT's Web site indicated the Ravenel Bridge between Mount Pleasant and Charleston was also closed Wednesday morning because of ice.

Outside Florence emergency responders were out in force responding to a litany of wrecks along roads as motorists' vehicles slid off pavement and into ditches and guard rails.

"It might not sound like a lot but when you talk about freezing rain accumulations, you getting over a quarter inch, it's significant. You start talking about an inch that's extreme, that's historical for our part of the country," he said.

"You see this area of low pressure in the northern Gulf Coast, this is the culprit for what has spread, as you can see the cloud cover into the Deep South, an abundance of moisture, round two of this winter weather," Pfaff said referring to a Doppler radar image.

A freshly developing low pressure system in the Gulf could add to South Carolina's woes as it could keep the moisture and cold weather over the South longer than originally forecast -- or not, Pfaff said.

"This is going to be judgment day in respect to this ice storm," Pfaff said.

"The back side of this storm is going to be just as complicated as the front end," he said of the storm's departure.

Forecasters will need to remain flexible on overall accumulations and when the storm ends, Pfaff said.

Overnight meteorologists pushed back by about six hours the projected end of the storm and are probably going to have to increase the snowfall projections for Darlington and Marlboro Counties along with points north, he said.

"It's all going to depend on how long the cold air will stay locked in here," Pfaff said.

FMU, Coker and FDTC sports changes due to weather

FLORENCE, S.C. -- Due to the winter storm crossing through the Pee Dee area, several schedule changes have been made to the Francis Marion University sports landscape this week.

FLORENCE, S.C.,  – In anticipation of winter weather affectig the Pee Dee area and the potential for power outages, the Red Cross in conjunction with the Darlington County Emergency Management Office is opening a shelter at 7 p.m.Tuesday.

CHARLOTTE, N.C. – Duke Energy has begun moving crews in anticipation of a winter storm expected to cover its Carolinas service territory with snow, sleet and ice.

COLUMBIA, S.C. -- The South Carolina Department of Consumer Affairs has issued a release to warn residents about price gouging that may take place as a result of the winter storm that will hit the Pee Dee Tuesday and Wednesday.

Gov. Haley declares state of emergency ahead of winter storm

COLUMBIA, S.C. -- Governor Nikki Haley has declared a State of Emergency to mobilize additional state resources should they been needed in response to hazardous weather.

Tips to prepare your vehicle, home for severe winter weather

CHARLOTTE, N.C. -- Severe winter weather -- including snow, ice, sleet and freezing rain -- is expected throughout much of the Carolinas through Thursday.

Be Prepared for the Storm

Customers who experience an outage should call Duke Energy’s automated outage-reporting systems for their respective utility:

Customers may also report an outage or view current outages online at www.duke-energy.com/storms

Then notify us so we can get your power back on. If your power goes out, call Marlboro Electric, (843) 479-3855. Please make sure we have your correct phone number in our outage management system.