First in a series

FLORENCE, S.C. – September marks the start of the Count 5 public awareness campaign, which begins with the first of the Five Golden Keys: sleep.

Sleep – according to child development expert Helle Heckmann, who created the Five Golden Keys concept – is an undervalued part of a child’s life, because sleep powers a child’s growth and physical function.

“A child under 6 years needs 12 hours of sleep to be capable of the demanding life we are offering them,” Heckmann said.

Heckmann also said sleep is one of the most important functions in a child’s social interactions with other children, which when inhibited hurts their growth.

“Children’s play is all about transition in the play and flexibility,” Heckmann said. “If you are not feeling good and well, it is difficult for you to take part and play with the other children. It’s very easy for those children to disappear into the media. It takes a lot to be social. It is a giving and taking.”

Heckmann said if a child's social interaction is inhibited, then the child is more likely to be lonely as he or she grows older.

Dr. Weave Whitehead, who is a pediatrician at the Pediatric Associates of Florence, said good sleep habits should be formed while children are still babies, and parents must be consistent when enforcing good sleep habits.

“The longer we wait to help the baby learn the healthy sleep routines, the harder it is to get it established,” Whitehead said.

“I don’t know that there is one that is better than the other, but what is important is that you pick a method for correcting problems or establishing routines and stick with it,” Whitehead said.

According to Whitehead, sleep is essential to heal the body and process what a child experiences throughout the day. Sleep also is important for a child’s cognitive and physical growth.

To encourage healthy sleeping habits, Whitehead said to start early with the routines, don’t allow the use of electronics in the bedroom and establish a predictable routine.

Catherine Sanderson, who is a teacher at the Child Development Center at Woods Road, has firsthand experience with the effect of sleep deprivation in students.

Sanderson said she had one student who each Thursday morning would have behavioral problems in school. After talking to the student’s parents, Sanderson realized the student did not get enough sleep on Wednesday nights because of a weekly family tradition.

Sanderson asked the parents if she could allow the student to sleep for a little while on Thursday mornings, which made a complete difference in the student’s behavior for the rest of the day, Sanderson said.

"You almost have to relearn what you're supposed to do in a social setting," Sanderson said.

In addition to the behavior changes, Sanderson said, she sees sleep-deprived students who act with aggression or refuse to engage in class activities.

Sanderson had another student who would continuously fall asleep in class or while playing during the school day. Sanderson asked the student's mother about his sleeping patterns, and Sanderson discovered the mother put an iPad in her son's hands each night, and that took away from the 11 hours of sleep he should get.

"Children like routine," Sanderson said. "They're more comfortable with routine."

With her own children, Sanderson had her own bedtime routine. She would read a few stories to her children, sing a song and rub their backs.

For more information on the Count 5 campaign or a child's sleep needs, visit theschoolfoundation.org.

Many of us believe sleep is important, and probably all of us would admit that more would be better – not only for the adults in our households but for everyone. We know that sleep generally makes us feel better, but current research helps us understand why. 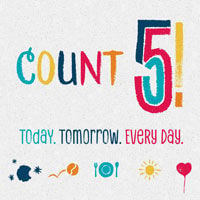 The School Foundation and Florence One’s Count 5! campaign was launched Friday morning. More than 250 stakeholders convened to learn how five budget-neutral parenting and caregiving priorities can have the potential to positively shift the trajectory for school and life success for Florence’s youngest children.

Each month, Count 5! will center on a new strategy, and stakeholders were encouraged to consider ways to embrace the project and support efforts to engage parents in real life applications. We were challenged to commit.

In the coming months, the Morning News will focus on one of the Five Golden Keys.

BRIAN NAYLOR: Children need to keep on the move

The School Foundation and Florence One Schools’ Count 5! campaign is focusing on movement during the month of October.

FLORENCE, S.C. – Movement, the second month of the Count 5 campaign, is one of the most vital parts of a child’s development, Florence One Schools readiness director Floyd Creech said.

As Thanksgiving approaches, we make plans to spend time together at a family meal. But what about the other 364 days of the year?

FLORENCE, S.C. – November is here, and that means that nutrition is the focus for The School Foundation and Florence One School’s Count 5 public awareness campaign.