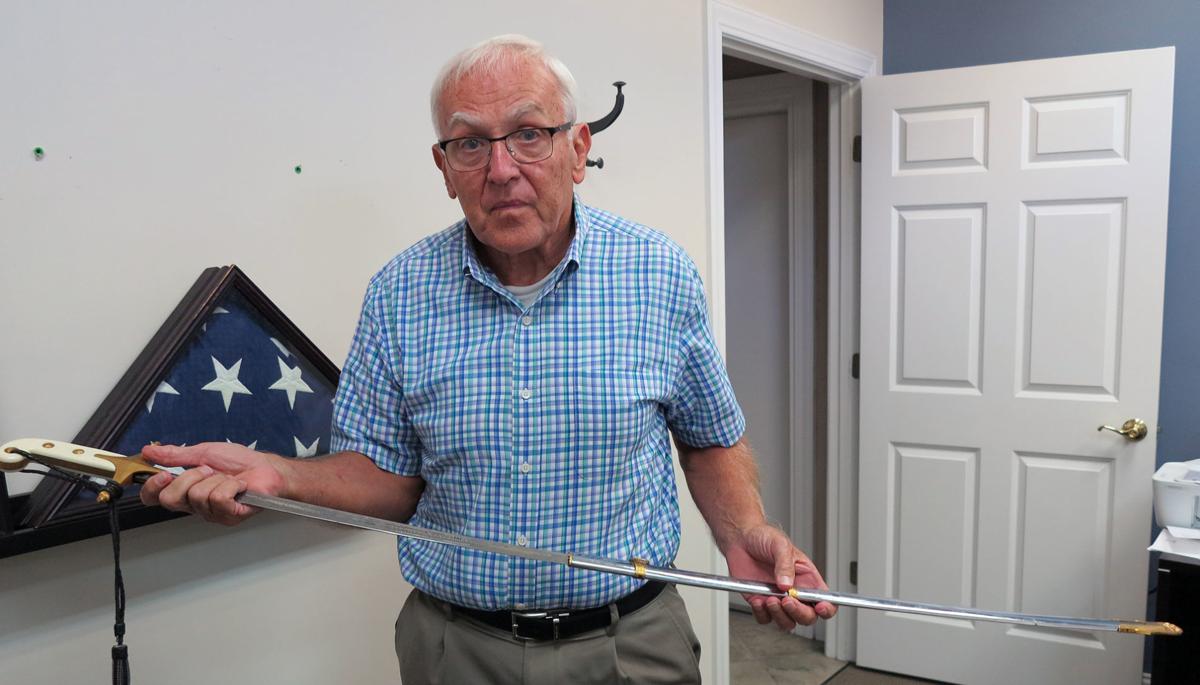 Dick Puffer holds the sword he wore with his dress uniform in the U.S. Marine Corps. He served during the Vietnam War. 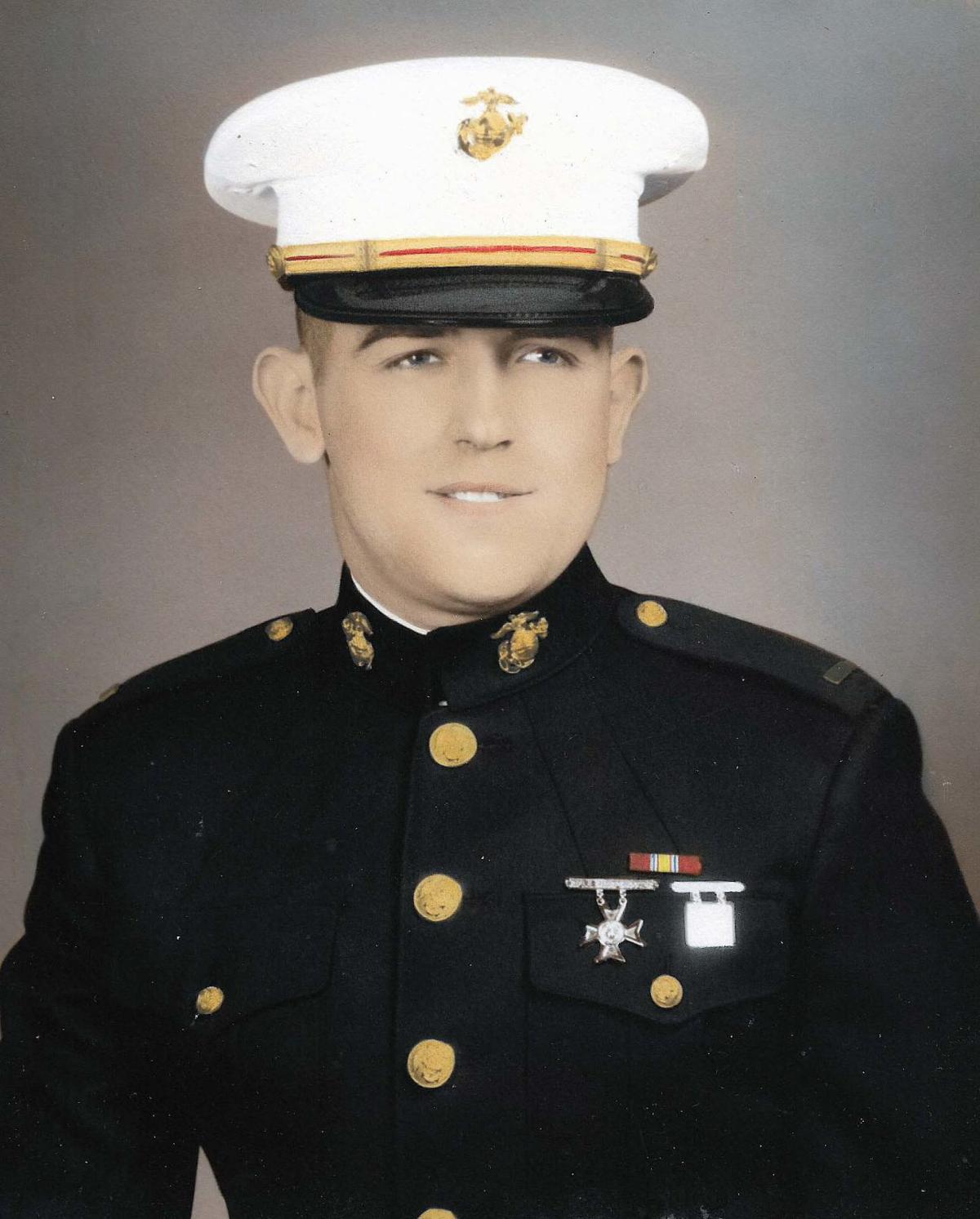 Dick Puffer enlisted in the U.S. Marine Corps in the late 1960s after graduating from college in New York.

Dick Puffer holds the sword he wore with his dress uniform in the U.S. Marine Corps. He served during the Vietnam War.

Dick Puffer enlisted in the U.S. Marine Corps in the late 1960s after graduating from college in New York.

HARTSVILLE, S.C. – Richard A. “Dick” Puffer remembers the day he told his parents he had enlisted in the United States Marine Corps. That was more than 50 years ago.

The Vietnam War was at about the midway point, and large operations with casualty counts were being reported daily in the news.

“My father and I were doing the dishes,” Puffer said.

Puffer said he started out saying “I don’t think I told you, but I signed up for the Marine Corps.”

His father, a World War II veteran, made it known he thought that wasn’t a smart move.

Puffer, who was a college student with a deferment, said for some reason the Marines fascinated him.

“I said it was something I had to do,” he said. “Then we continued to do the dishes.”

Puffer said there were many anti-war demonstrations going. He said many people in this country were not in favor of American involvement in that war.

Puffer said regardless of whether this was a popular war, he thought it was important to be a part of it.

Puffer has said that at the time he was a “Yankee, Catholic, hippy.” He was also a student government leader at State University of New York at Cortland.

“I really enjoyed my time in college,” he said. “But I was very aware that while I was in college, there were a lot of people who were not in college who were fighting for our country.

He admits guilt was one of the primary reasons he signed up.

He enlisted, while a junior in college, in the United State Marine Corps. He signed up in 1967 for Marine Corps Officer Candidate School. And then he entered the Platoon Leader’s Class (PLC) and went to officer’s candidate school.

Puffer graduated in 1968 as a 2nd lieutenant.

At basic school, Puffer said, he learned to be a Marine officer. He also went to Vietnamese language school. He said the Marines do a good job of teaching and preparing officers.

Puffer said he took a course to try to learn tactics to “win the minds and hearts of the Vietnamese people.”

By the time he went to Vietnam, Puffer said, the opinion in the United States had started to change. Not everyone was against the war.

He said you couldn’t avoid knowing there was a war going on, because every night the network news gave a body count of the men killed in action in Vietnam. He said it was as if the networks kept score.

“It was a guerilla war, mostly fought by Viet Cong, South Vietnamese people supported by the North Vietnamese army who wanted to reunify the country,” he said.

Puffer said he arrived in Vietnam in May 1969 and took command of a platoon, the 1st Marine Division 2nd Battalion, Golf Company 2-1.

“We were there for each other,” he said. “The politics wasn’t our business.”

Puffer was involved in Operation Pipestone Canyon, a search-and-destroy mission. It was a combined effort of the U.S. Marine Corps, Army of the Republic of Vietnam and Republic of Korea Marine Corps that took place on Go Noi Island.

“We were somewhere in the Da Nang area,” he said. “We were trying to disrupt the

On July 3, after only 30 days in Vietnam, Puffer’s tour of duty was interrupted.

After hearing the loud explosion, Puffer said, he recalls looking down on people. He said he heard someone groan.

“I discovered it was me,” he said.

He said he was hit with shrapnel from the waist down.

He was sent to Japan, where he was operated on and stayed for a little more than a month.

He returned in August to Vietnam.

While in Japan, Puffer said, he got to watch the United States landing on the moon in Japanese on a small, black-and-white television.

War is messy, he said.

Puffer said you try to do something to make it worth your being there. When you think about it 50 some years later, it is no less messy.

“We try to remember more of the good,” he said.

When he returned to Vietnam, he was assigned to the 3rd Military Police as an infantry officer in command of a platoon security battalion on the outskirts of Da Nang.

He said it was his duty to make sure they weren’t attacked. He got promoted to company commander, which included two platoons: the security platoon and the POW platoon.

“One of the ‘fun’ things I got to do was to be called upon to provide security for the Bob Hope Tour,” he said. “We were one of several units who could see the stage. It was a good show.”

He said that when Richard Nixon was elected president, the military started to downsize. He said he had a choice to go home early or go on R&R.

“I went back stateside,” he said.

He went to Camp Lejeune, where he was with the 2nd Marine Division. Six months later, he was out of the service.

“I loved the Marine Corps, but I hated the war,” he said. “I wish we had learned a lesson from that war.”

He said there is a type of Marine “culture” that “once a Marine, always a Marine.” He said the camaraderie of the Marines makes you feel that way.

After the war, he traveled abroad for about six months. Then he moved to South Carolina to teach. He taught in Lee County, met his wife, Sylvia, and stayed.

Puffer’s career includes being an educator, journalist, director of corporate communications and journalism professor. He retired in May 2016 from teaching at Coker College. He continues to serve as executive director of The Byerly Foundation in Hartsville.

In his spare time, he is an avid reader and exercise enthusiast. He is a member of the F3 workout group in Hartsville. F3 stands for Fitness, Faith and Fellowship.

He is a grandfather and enjoys spending time with his two daughters, Eve and Inga, and their families.