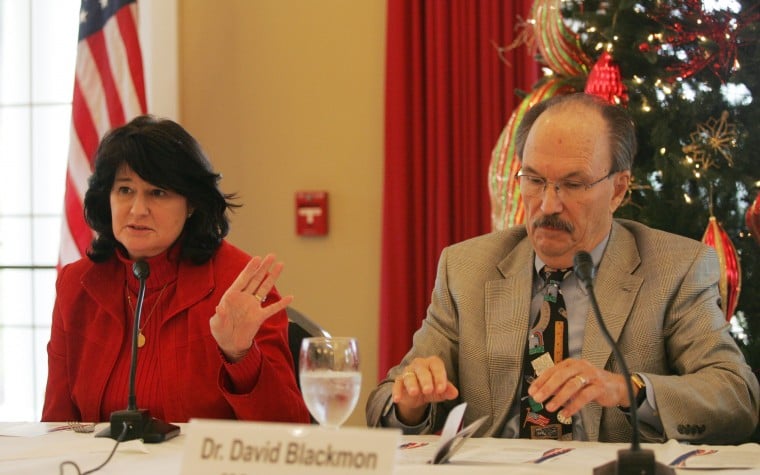 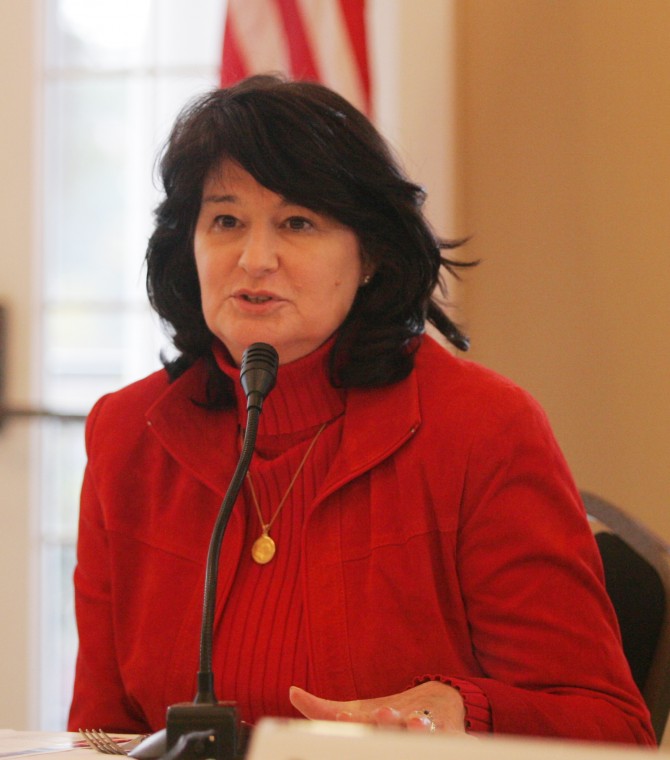 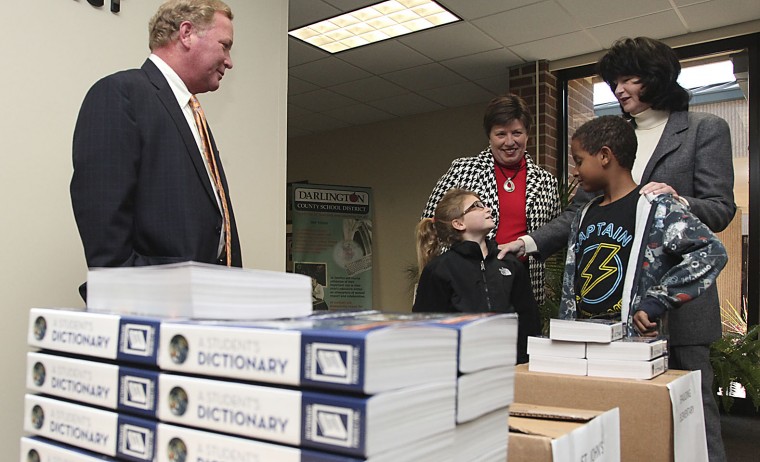 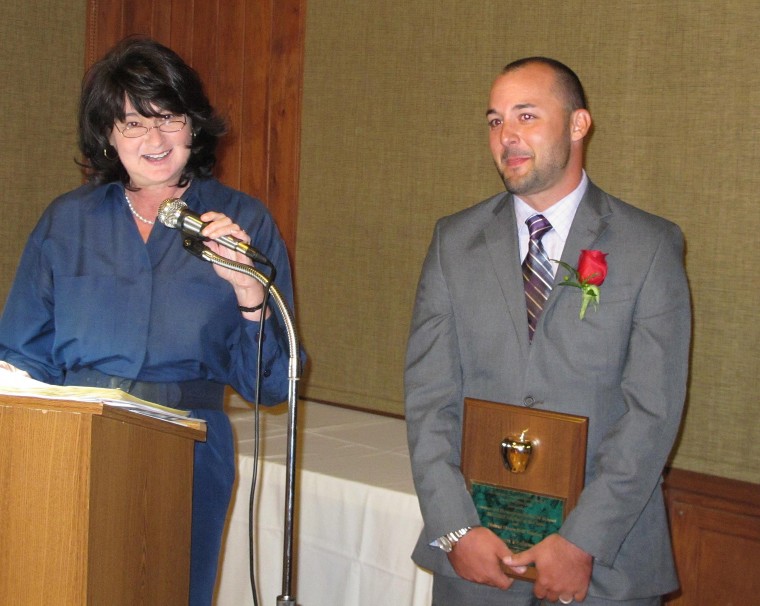 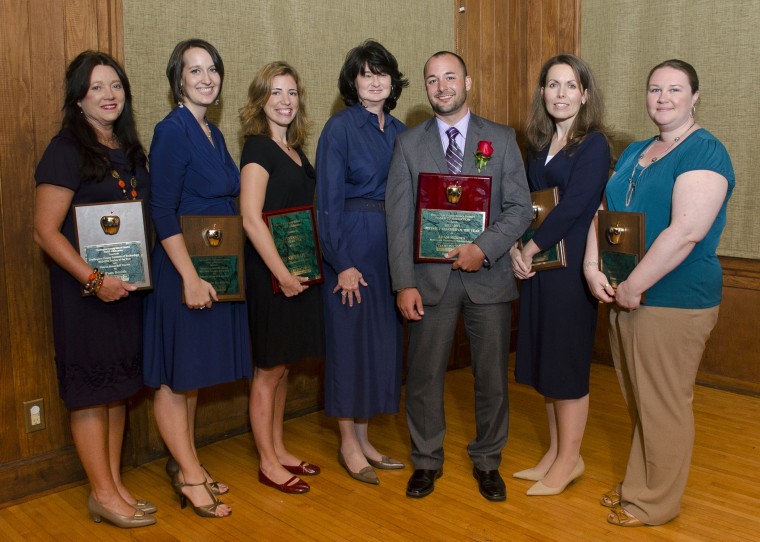 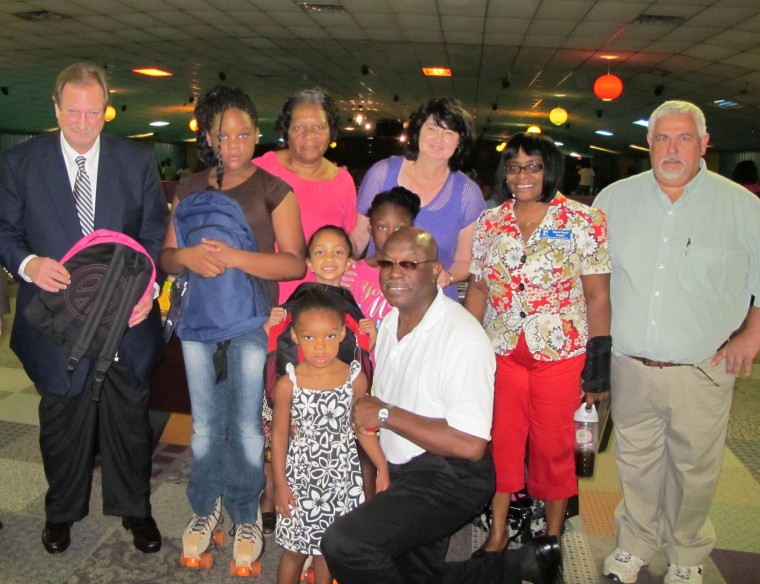 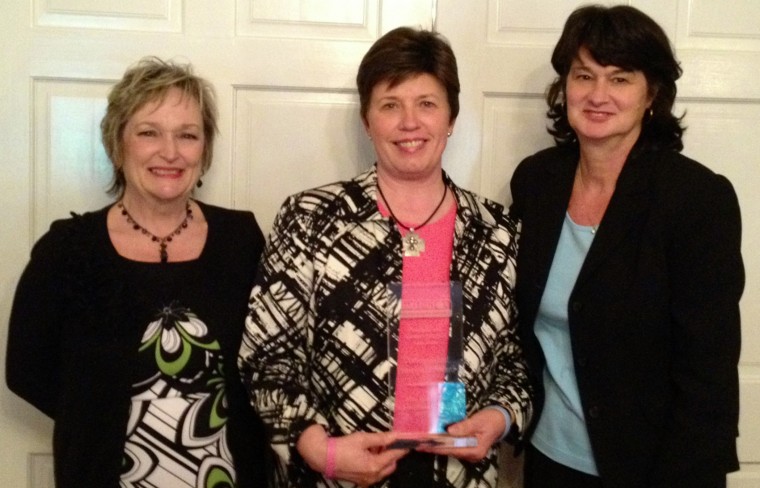 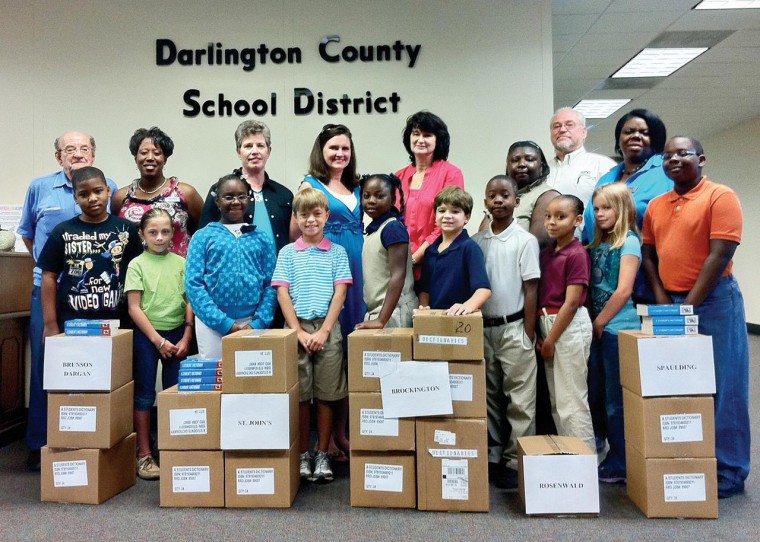 The Darlington County Board of Education recognized 23 school-level Teachers of the Year and five finalists for Darlington County School District Teacher of the Year Monday. From left are: Janet Wilhite of North Hartsville Elementary School, Carla Jefferson of Spaulding Middle School, Superintendent of Education Dr. Rainey Knight, Jamie Edmonds of Mayo High School for Math, Science and Technology, Board of Education Chairman Charles Govan, Victoria Williams-Cooper of Darlington Middle School and Lori Thrailkill of Thornwell School for the Arts. 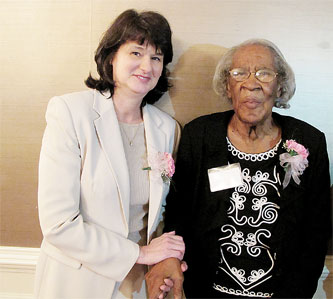 Dr. Rainey Knight, left, superintendent of the Darlington County School District, and retired educator Dorothy White of Lamar were among the seven women honored by the Girl Scouts of Eastern Carolina Thursday night at Darlington County Club with the Mary Dean Brewer Women of Distinction Award.

The Darlington County Board of Education recognized 23 school-level Teachers of the Year and five finalists for Darlington County School District Teacher of the Year Monday. From left are: Janet Wilhite of North Hartsville Elementary School, Carla Jefferson of Spaulding Middle School, Superintendent of Education Dr. Rainey Knight, Jamie Edmonds of Mayo High School for Math, Science and Technology, Board of Education Chairman Charles Govan, Victoria Williams-Cooper of Darlington Middle School and Lori Thrailkill of Thornwell School for the Arts.

Dr. Rainey Knight, left, superintendent of the Darlington County School District, and retired educator Dorothy White of Lamar were among the seven women honored by the Girl Scouts of Eastern Carolina Thursday night at Darlington County Club with the Mary Dean Brewer Women of Distinction Award.

DARLINGTON – Dr. Rainey Knight said she never set out to be a school teacher, a principal or a school district administrator.

She had a degree in biology and a minor in chemistry from Francis Marion College when she got a call one day from someone asking if she might be interested in teaching and coaching at Cheraw High School. She said yes and began her career as a teacher in 1977.

Knight, who recently retired as the Darlington County School District’s superintendent of education after 14 years in the position, said that when she came to work for the school district in 1993, it never crossed her mind that she would become superintendent.

She was hired as math and science coordinator. She came to the district after working for the State Department of Education.

“Darlington County was close to my hometown of Cheraw. My son was a fourth-grader. I really liked working with the teachers here,” she said.

In an interview with The Hartsville Messenger, she said it was time to retire. “I kind of lived in denial sometimes,” she said. She said that the job in recent years has taken more out of her.

She added that she does want to catch up on her reading and spend more time with family.

“I just felt like I just needed to stop,” she said. “But it’s hard to cut back when you really feel like you’re giving your all. I’m a very hands-on person. I really don’t have any plans. I hope to be able to continue to work with teachers in some way. But I want it to be something that I really have a passion for. I hope I can have some influence in a positive way.”

Knight is currently winding down her last few days working through a transitional period with the district’s new superintendent, Dr. Eddie Ingram.

Over the past 36 years Knight has held the positions of adjunct instructor at the University of South Carolina, education associate with the State Department of Education, secondary coordinator, principal and associate superintendent with the Darlington County School District before becoming superintendent in 1999.

Last year Knight was named South Carolina Superintendent of the Year by the S.C. Association of School Administrators.

When a federal judge ordered the creation of a magnet school at the formerly historically black Mayo High School as part of a school desegregation order in the mid 1990s, the Darlington County Board of Education picked Knight to head the committee that would develop a magnet school program. “I didn’t know anything about magnet programs,” Knight said.

“For that year, we were focused on developing a magnet program,” she said. That effort involved a number of visits to magnet schools throughout the Carolinas.

The end result was the creation of Mayo High School for Math, Science and Technology. And Knight became the school’s first principal.

After a couple of years in that position, an opening at the district level became available for associate superintendent for curriculum and instruction. Knight got the job.

When her boss at the time, Superintendent Dr. Jimmy Newsom, announced his retirement in 1999, the school board turned to Knight to fill the superintendent’s position on an interim basis.

Six months later, the board unanimously voted to make her superintendent full-time.

“I just feel so fortunate to have worked with some tremendous people in this district,” Knight said.

From the outset as superintendent, Knight focused on raising teacher pay in the district above the state average. She said she believes that is necessary to attract and keep top quality teachers. She said she will never waver from that view.

“The job that we ask teachers to do is not an easy one,” Knight said. “We owe them that, and we owe them the opportunity to grow professionally. They need the creativity and the flexibility to be the teacher you want to be.”

Teachers today, Knight said, have far more responsibilities than they did when she started teaching. “It’s a different day with children today,” she said. “I’ve enjoyed working with children. They’ve tolerated me.”

A lot of first year teachers do not continue in teaching because they don’t get the support from administrators, she said.

But there are some who are ineffective and need to be removed from the classroom, she said. And principals know when a teacher is not effective, Knight said. “I’ll ask them, ‘Do you want that person teaching your child?’ Because if that teacher isn’t good enough for your child, she’s not good enough for anybody else’s child,” she said.

A good teacher, she said, comes to the profession with a belief that children can learn more and at higher levels. “If they’re not, then what are we about?” she said.

She said she has also enjoyed working with some fine principals over the years. “They have a big job. When you’re a principal you take on so many other responsibilities,” she said.

And she said she is grateful to the Board of Education for its confidence and faith in her and its support over the years not only for her but for principals and teachers and district administrators. “I have been fortunate, blessed, to work with a super board,” Knight said. “Being a board member is an awesome responsibility.”

Voters in the county approved a $48 million bond referendum that allowed the construction of three new schools and renovations to several others. District officials continue to implement technology plans that provide core teachers with laptops, microphones and document cameras, puts interactive white boards in district classrooms, and beginning with the new school year will begin establishing a one-to-one iPad program for students.

The district has established magnet schools and magnet programs at the elementary, middle and high school levels, an alternative school for students who were unable to thrive in a regular school setting and a career technology school. The district also established an expanded choice program to give parents more options about what schools they can send their children to.

More recently, the district has moved to expand its School Resource Officer program and implement new safety and security measures in schools.

Knight pointed out that the improvements that have been made came about in the face of $18 million in state funding cuts to the district over a period of several years.

Knight said there remains much work to do to continue improving Darlington County’s public schools. “We haven’t arrived yet. You never arrive,” she said.

“But I hope we have changed the perception of public education in Darlington County.”