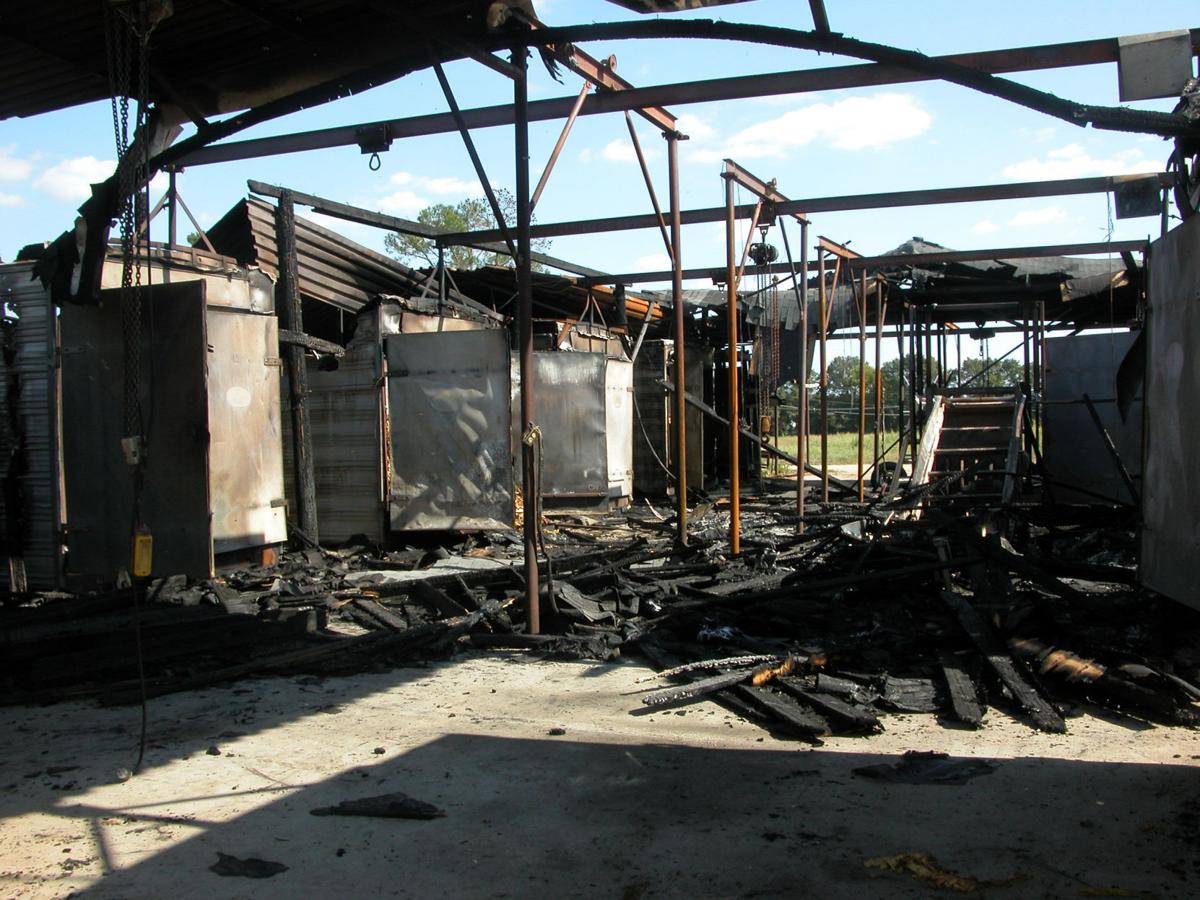 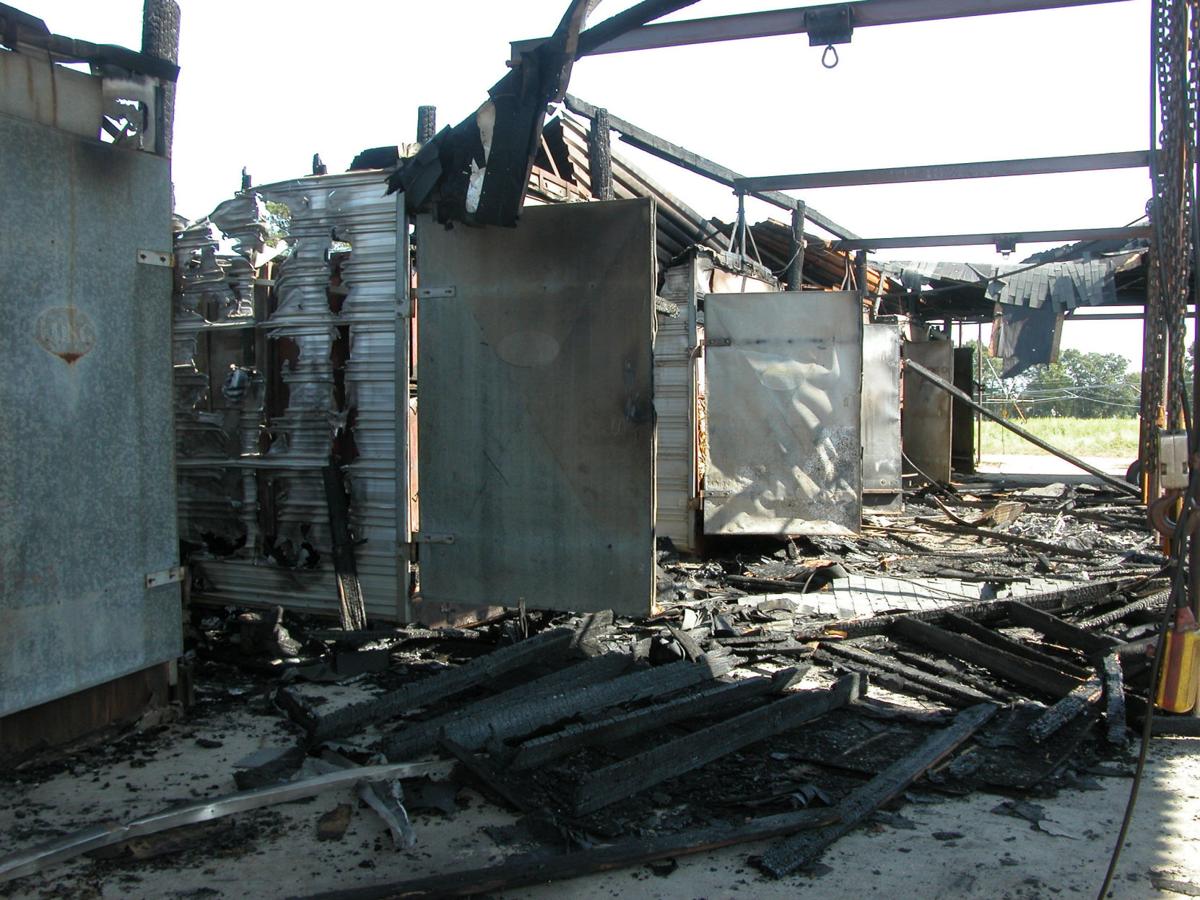 Tobacco barns that were destroyed in Saturday's fire at Griggs Farm in Byrdtown. 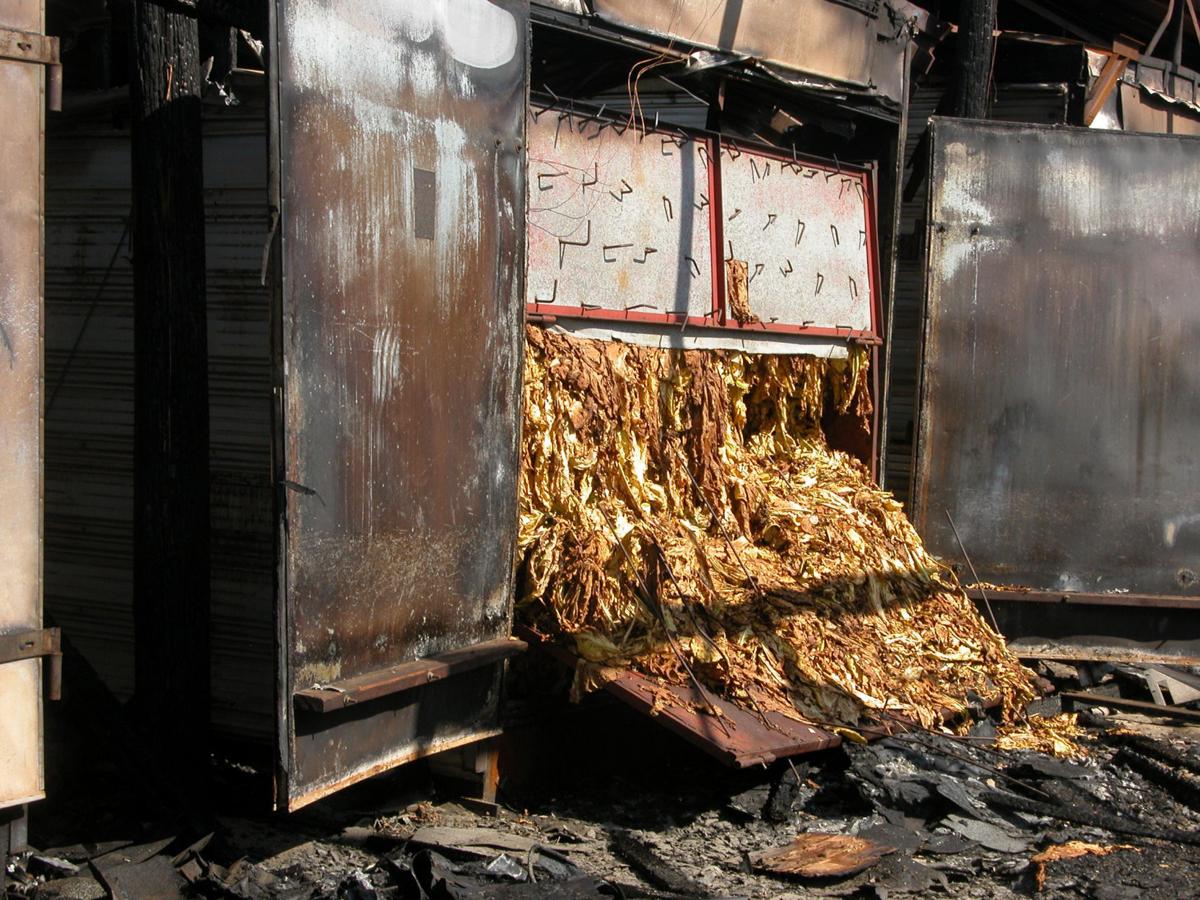 This tobacco was too green to burn but was ruined by Saturday's fire at Griggs Farm. 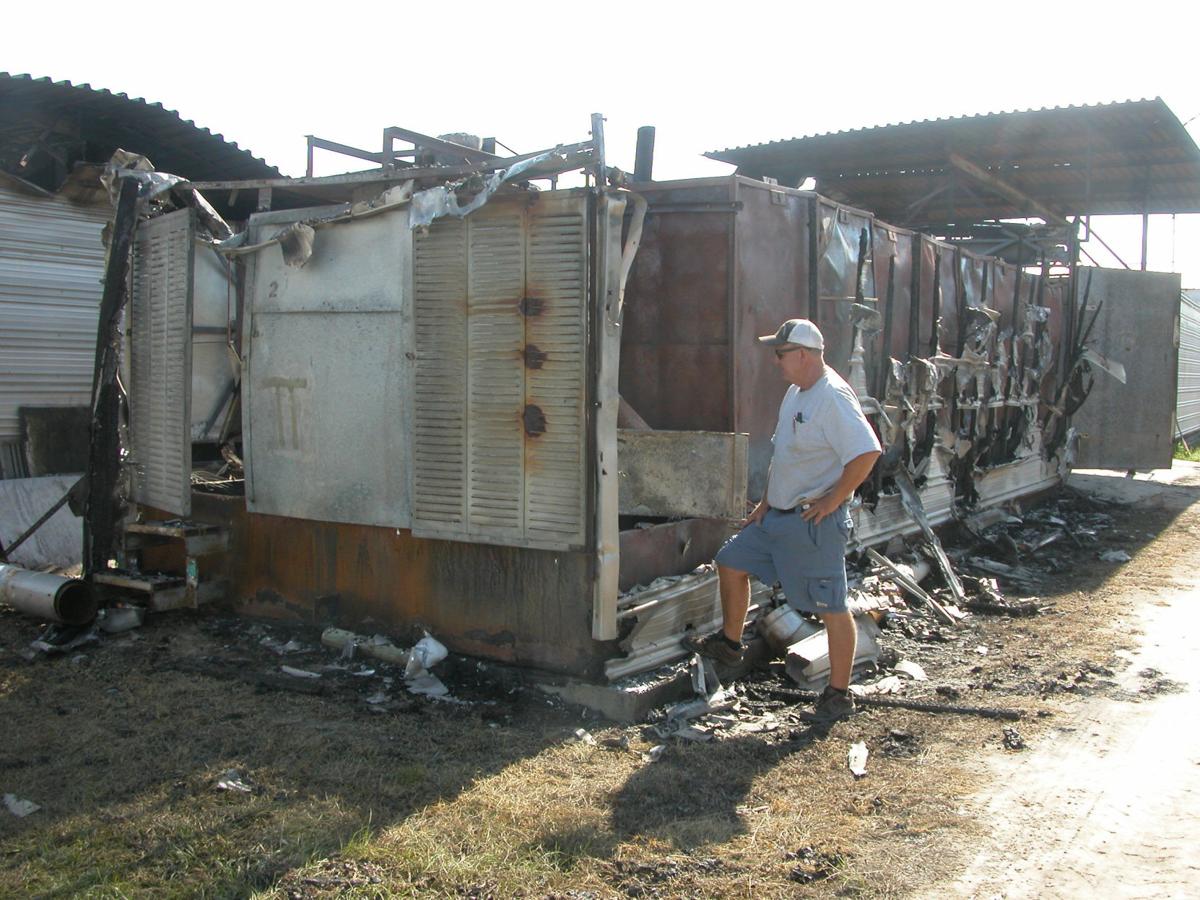 Tim Griggs inspects the burned-out tobacco barn where a fire Saturday at Griggs Farm in Byrdtown is believed to have started. 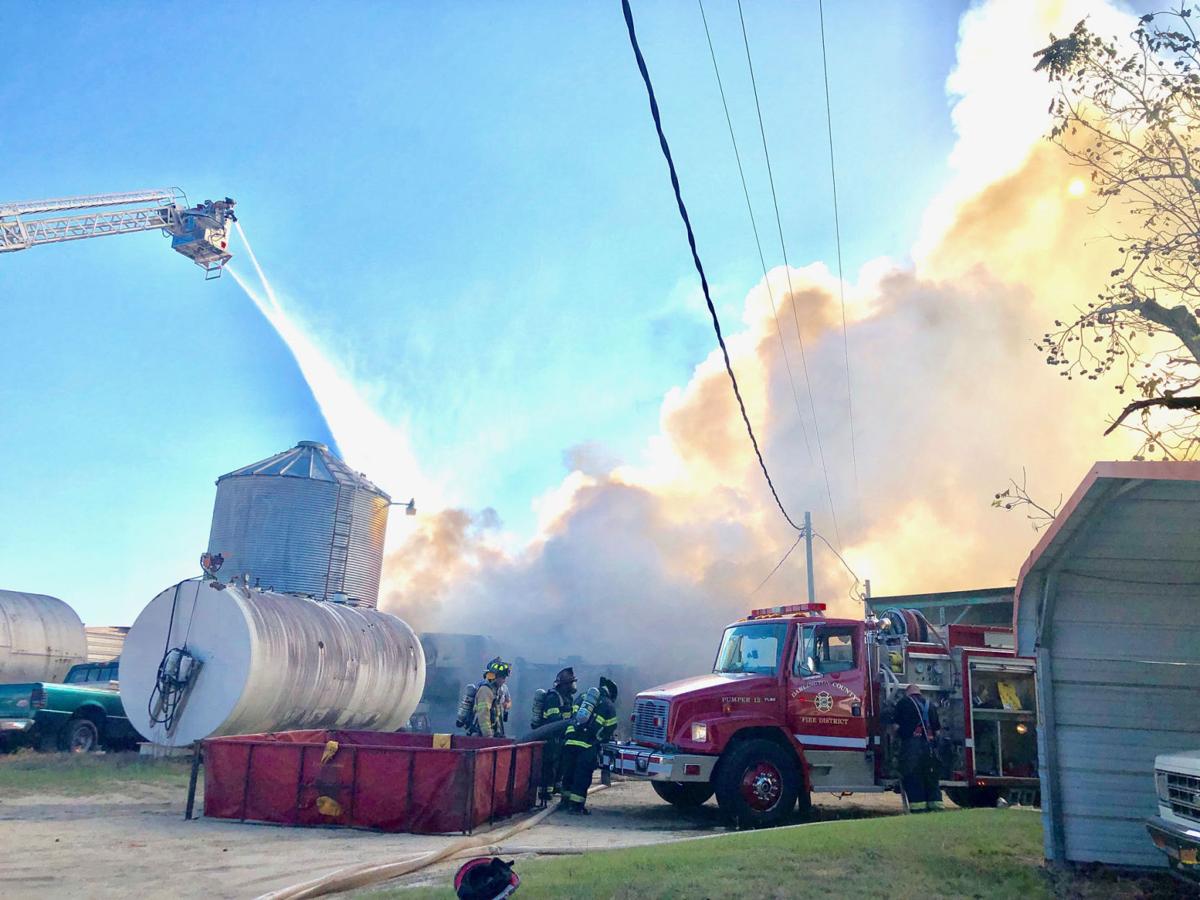 Firefighters spray water from above on burning tobacco barns Saturday afternoon at Griggs Farm in Byrdtown. The fast-spreading fire caused major damage but no one was was injured. 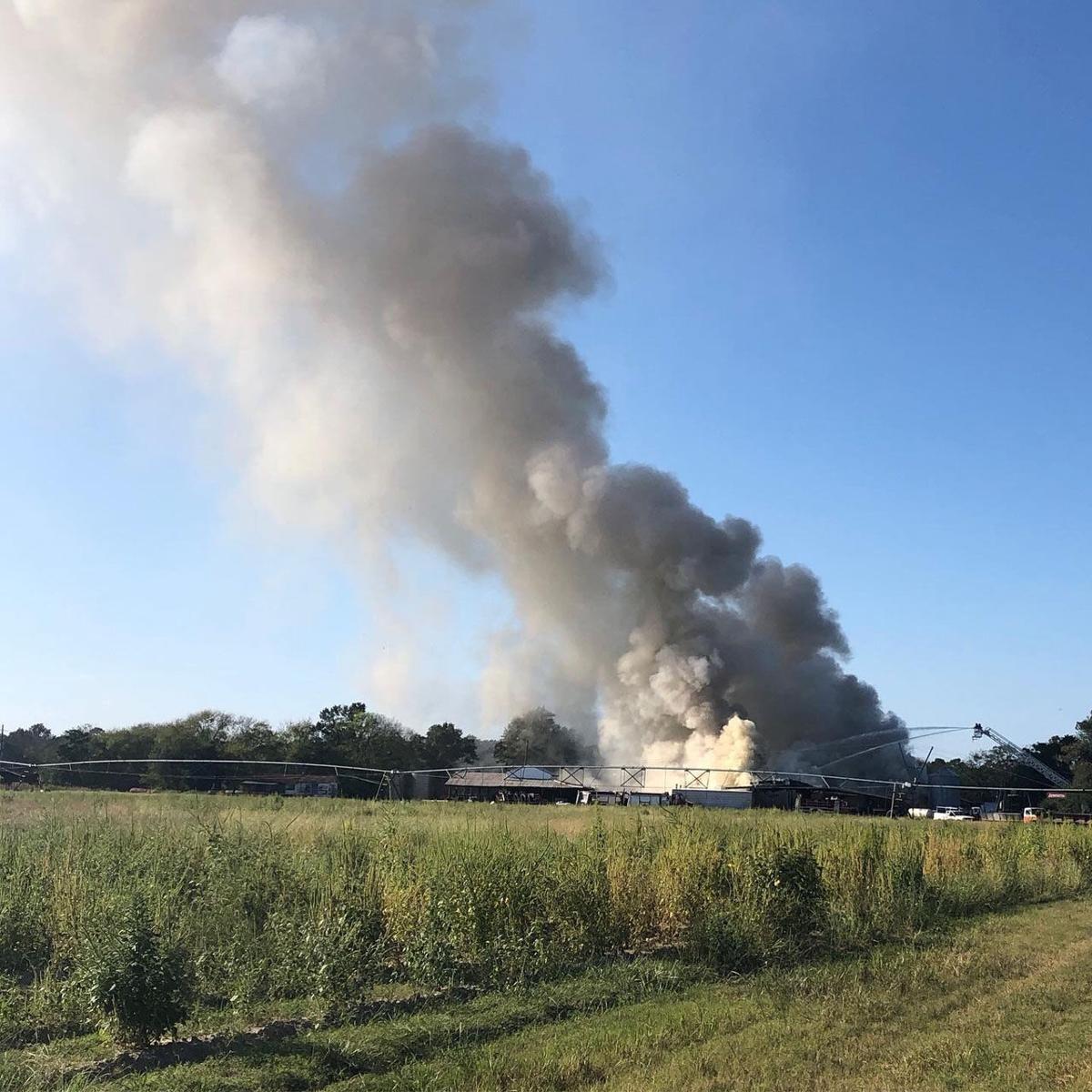 Smoke rises over Griggs Farm in Byrdtown as firefighters battle a fire that destroyed several tobacco barns and caused damage in the thousands of dollars Saturday.

Tobacco barns that were destroyed in Saturday's fire at Griggs Farm in Byrdtown.

This tobacco was too green to burn but was ruined by Saturday's fire at Griggs Farm.

Tim Griggs inspects the burned-out tobacco barn where a fire Saturday at Griggs Farm in Byrdtown is believed to have started.

Firefighters spray water from above on burning tobacco barns Saturday afternoon at Griggs Farm in Byrdtown. The fast-spreading fire caused major damage but no one was was injured.

Smoke rises over Griggs Farm in Byrdtown as firefighters battle a fire that destroyed several tobacco barns and caused damage in the thousands of dollars Saturday.

HARTSVILLE, S.C. - A sudden fire swept through several tobacco barns at Griggs Farm (Sugar Hill Acres LLC) in the Byrdtown community of Darlington County outside Hartsville on Saturday afternoon, destroying as many as eight barns filled with tobacco that was almost ready for market, and damaging or destroying thousands of dollars’ worth of equipment.

No one was injured in the blaze, which occurred at the farm’s facilities at 2564 Bethlehem Road, officials said.

Tim Griggs, one of the four owners of the farm, estimated damages from the fire, which includes lost crop and damaged or destroyed barns and equipment, at $225,000. “It’s a lot of money,” he said

“It was devastating,” Griggs said. “It started in one barn and spread from one to the other.” Seven or eight barns out of a total of 12 were destroyed or had heavy damage, he said.

The barns that were destroyed or damaged most seriously were all under one shingled roof, Griggs said. He said it’s likely the shingles and old wood in the structure caused the fire to spread rapidly.

Other barns under a tin roof fared better but still had some damage, he said.

The barns are used to cure tobacco for market, Griggs said. Each barn was full, containing about 2,700 pounds of tobacco each that was curing or cured, he said. “At two dollars a pound, that gets pretty expensive,” Griggs said.

Griggs said someone checked on the number one barn, where the fire is believed to have started, at 3 p.m. and everything was OK. By 4 p.m., flames were spreading through the complex, he said.

Several large pieces of mechanical equipment, some of it used to help move tobacco, were also destroyed in the blaze, Griggs said.

“We tried to put it out ourselves, but it was just blazing and it was moving so fast,” he said.

Griggs said the cause of the fire is believed to be accidental, but he said investigators will be looking into what started the blaze. “It could be something electrical, it could be propane, we just don’t know right now,” he said.

In addition to Griggs, the farm is owned by his father, Robert Griggs, brother Bobby Griggs, and cousin William Hendrix. “All of us shared in the loss,” Tim Griggs said. He said the farm has been in his family for generations, going back to one of his great-grandfathers.

Griggs said the farm has about 130 acres in tobacco. Other farm products include corn, vegetables, wheat, hay, cotton, soybeans and cattle.

“We have insurance. But that won’t cover everything,” Griggs said.

“It was a very large fire. There was already a lot of fire by the time we got there,” Flowers said. “The way these things are built, we weren’t able to enter them to fight the fire.” He said the structure’s age also contributed to the rapid spread of the fire. Firefighters also encountered some problems with water distribution, he said.

Griggs praised the work of firefighters who battled the blaze.

Griggs’ daughter Jessica Griggs has started a GoFundMe page to help raise funds to cover some of the loss from the fire.

“We are humbled by the outpouring of love and support and the prayers from our community and many many people have reached out to know how they might be able to help,” she wrote. “While we hope that insurance will cover some of what was lost, we are certain much won't be covered. One single (used) barn will cost upwards of $6,000. A new piece of equipment will be well over $10,000. I thought, with so many folks offering to help, even just a little bit could go a long way, so I started this GoFundMe. Every $10 helps, so if you can help even a little, please do. “If you're not able to contribute, please continue to pray for Griggs Farm and all those affected.”

The page can be found at https://www.gofundme.com/f/fire-devastates-griggs-farm.

Griggs said neighbors not only offered help in fighting the fire but have also offered the use of equipment and other assistance to help with the farming operation.

Tobacco still in the fields won’t wait, and Monday afternoon workers on the farm were busy loading trailers with newly harvested leaf.